Review: The cheapest DirectX 11 card up to date

This article is also available in German.

Nvidia is working around the clock to launch Fermi, but AMD keeps gaining ground with its Evergreen series of DirectX 11 graphics cards. Unfortunately for AMD and ATI, although Nvidia doesn’t have DirectX 11 hardware, the current availability of Radeons isn’t quite bringing in truckloads of cash to the red team. Being certain that the availability is slowly improving, AMD decided to launch another DirectX 11 card dubbed Radeon HD 5670 and this time the company is aiming for lower-end mainstream segments of the market. Sapphire HD 5670 sample we’ve received runs at 775MHz GPU and 1000MHz (4000MHz effectively) for GDDR5 memory.

AMD is also planning cards based on entry level Cedar DirectX 11 chips, which means that our today’s card won’t remain the slowest offering. Like all chips, Redwood is planned in two versions. Redwood XT – the card we’re testing today is the faster one and you can expect it to be priced at €70-100. The card is set to replace the HD 4770 and 46x0 series.

Redwood XT chip features only a quarter of available 1600 stream processors. It’s well worth noting that further up the offer is AMD’s Juniper chip which powers the HD 5770 and features 800 stream processors. AMD’s fastest offering is called Cypress and it ticks in Radeon HD 5870 with full blown shader count of 1600. This comparison clearly shows where the HD 5670 will be positioned among DirectX 11 cards and AMD’s intent to nicely fill in its offer and include something for every part of the market. Lets also notice that Redwood XT chip is much smaller than either Juniper or Cypress (Hill ed.).

Apart from 400 stream processors, Radeon HD 5670 features 8 raster operation units (ROPs), 20 texture mapping units and, just like Juniper cards, comes with GDDR5 memory on a 128-bit memory interface. Our test sample features 1GB of memory but the cards will also come in 512MB flavors. We must admit that although it is the slowest Evergreen card to date, the HD 5670 still packs enough punch to allow for pleasant gaming at 1280x1024 or even at 1680x1050.

Sapphire HD 5670 might prove to be ideal for many users as it comes with low consumption, a bunch of different video connectors (Dual-DVI, HDMI, DisplayPort) and Eyefinity support. That’s not all though as it also features 7.1 audio, Dolby True HD, DTS Master Audio, DirectX 11 support for less than €100, a silent nonreference cooling solution from Arctic Cooling and CrossFireX support. 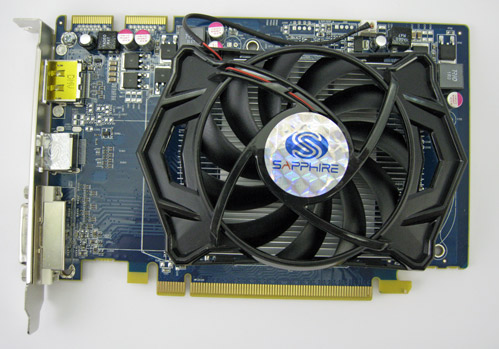