AMD under the bonnet of the world's fastest supercomputer 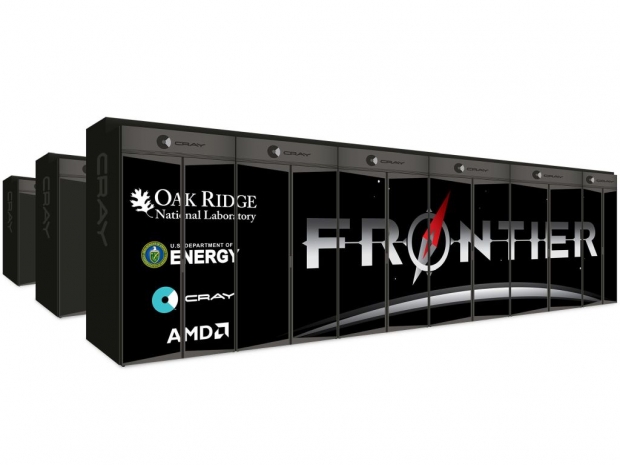 Sorry Intel you are not fast enough for the final Frontier

The world’s fastest supercomputer will be built in the US by 2021 using AMD chips.

The US Department of Energy announced that the machine, dubbed Frontier, will be built by chip designer AMD and supercomputer manufacturer Cray for the Oak Ridge National Laboratory in Tennessee. It’s expected to produce more than 1.5 exaflops of processing power, and will be used for a range of tasks, performing advanced calculations in areas like nuclear and climate research.

"Frontier will be able to perform 1.5 quintillion calculations per second and its Frontier’s record-breaking performance will ensure our country’s ability to lead the world in science that improves the lives and economic prosperity of all Americans and the entire world”, said Secretary of Energy, Rick Perry, in a press statement.

“Frontier will accelerate innovation in AI by giving American researchers world-class data and computing resources to ensure the next great inventions are made in the United States.”

When constructed, Frontier should be the most advanced example of “exascale computing”.

It will be based on Cray’s new Shasta architecture and Slingshot interconnect and will feature future-generation AMD Epyc CPUs and Radeon Instinct GPUs. Frontier will span more than 100 Shasta supercomputer cabinets, each supporting 300 kilowatts of computing. Single-socket nodes will consist of one CPU and four GPUs, connected by AMD’s custom high bandwidth, low latency coherent Infinity fabric.

AMD says Frontier will have as much processing power as the next 160 fastest supercomputers combined. It’ll be able to handle an astonishing amount of data, with a bandwidth 24,000,000 times greater than the average home internet connection, capable of processing 100,000 HD movies in a second. It’ll also have a correspondingly huge footprint, taking up 7,300 square feet of space (roughly equivalent to two basketball courts) and containing 90 miles of cabling.

Earlier this year, the Department of Energy announced a similar project: the supercomputer Aurora, which is being constructed by Intel and Cray at Argonne National Laboratory. Aurora will likely be the first exascale supercomputer in the US, but Frontier will have greater processing power.

China is expected to have its own exascale supercomputer up and running by 2020 — a year ahead of America. China is also the world’s leader in terms of supercomputer volume, and is currently home to 227 of the world’s fastest computers - compared to just 109 operated by the US. Japan and the European Union are the other main contenders.

As you might expect the deal is particularly good for AMD. The contract is worth $600 million and Frontier will use scores of AMD’s EPYC CPUs, each connected to four of the company’s Radeon Instinct GPUs.

AMD hasn’t supplied the processors for the world’s fastest supercomputer since 2012, when AMD Opteron CPUs were used to push ORNL’s Titan computer to a benchmark of 17.59 petaflops per second.

The Department of Energy is believed to have chosen AMD for the performance of its processors, and its recent successes designing semi-custom silicon for Microsoft and Sony.