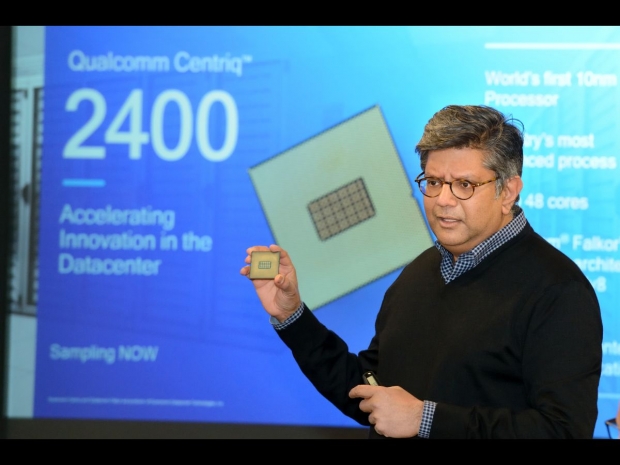 There is a company with a hot server SoC based on ARM architecture developed from the ground up that has just announced commercial sampling of the world’s first 10nm 48 Core SoC and guess what that company is called? Qualcomm. So, Qualcomm beats Intel at its own game and managed to announce and sample the world’s first mobile and now server 10nm SoC.

It is important to distinguish that the Centriq 2400 series has nothing to do with Snapdragon 835 as Centriq is a server SoC developed from the ground up, while the Snapdragon 835 is a custom mobile phone/tablet SoC developed for mobile applications. They both belong to Qualcomm, and you should look at them as distant cousins.

Developed from the ground up, based on Qualcomm in house developed Falkor 10nm CPU, the new Centriq 2400 series started shipping to major customers and it is expected to be commercially available in the second half of 2017.

The Falkor CPU is Qualcomm Datacenter Technologies’ custom ARMv8-compliant core developed from the ground up. It is highly optimized to deliver both high performance and power efficiency, and designed to tackle the most common data center workloads. 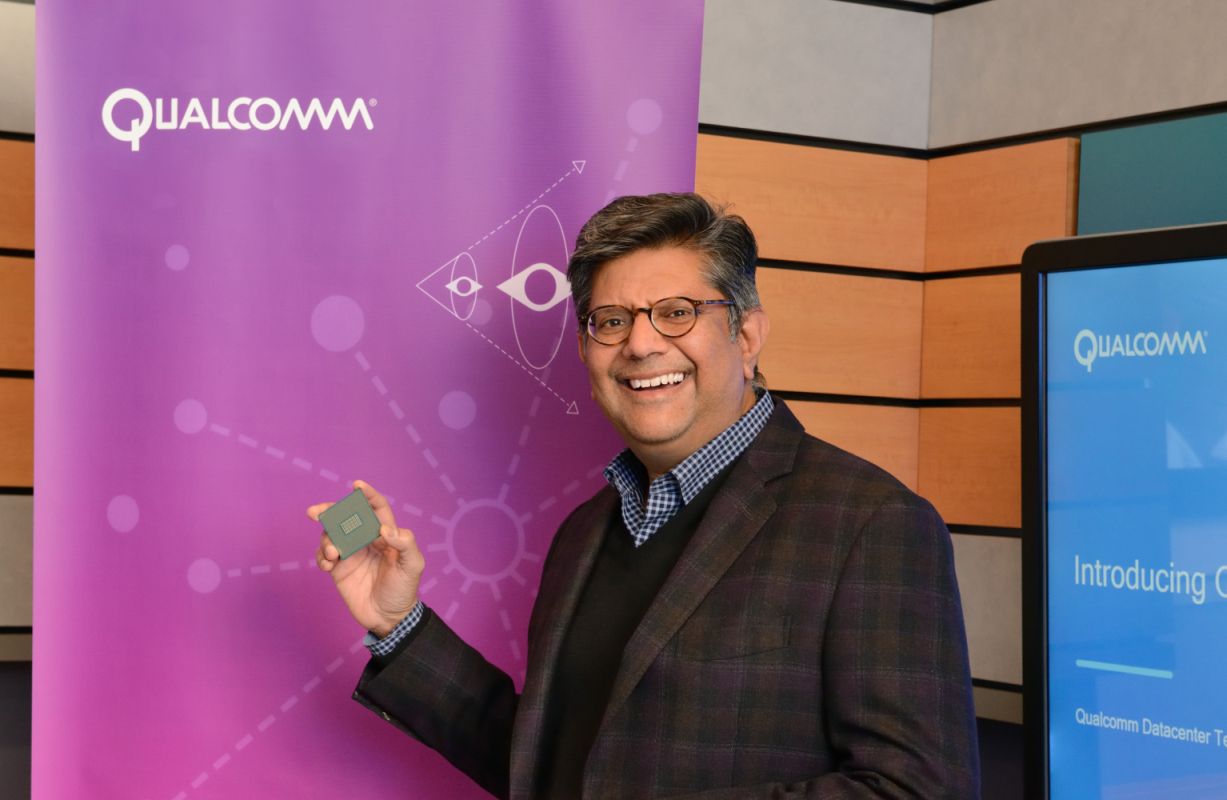 The company just didn’t want to get into too many details leaving us curious about the insides of the chip once codenamed Falkor, as they didn’t want to comment about the clock speeds, TDP, cache memory sizes and other relevant things. They don’t want the competition to know too much about the world’s first 10nm server solution.

Qualcomm did demonstrate a live server  that is sampling to key customers, OEMs and ODMs, and as you can imagine the company supports Linux based servers. The demonstration showed an actual Live cloud demo of a Spark based Big Data application. The server has processed a big data application that was able to analyze the trending twitter keywords and videos across the United States.

Qualcomm didn’t compare the Falkor based Centriq server to Intel’s server and didn’t gave us any actual benchmark against Intel’s servers, but the company repeatedly mentioned that the Centriq 2400 series will be competitive in both power and processing power to the competition.

Qualcomm confirmed that the server that will go to both ODMs and OEM partners support Linux operating systems, Java middleware and Hardoop, Spark, Twitter API and Facebook API. These are all open source solutions and there will be more of them announced at later date. 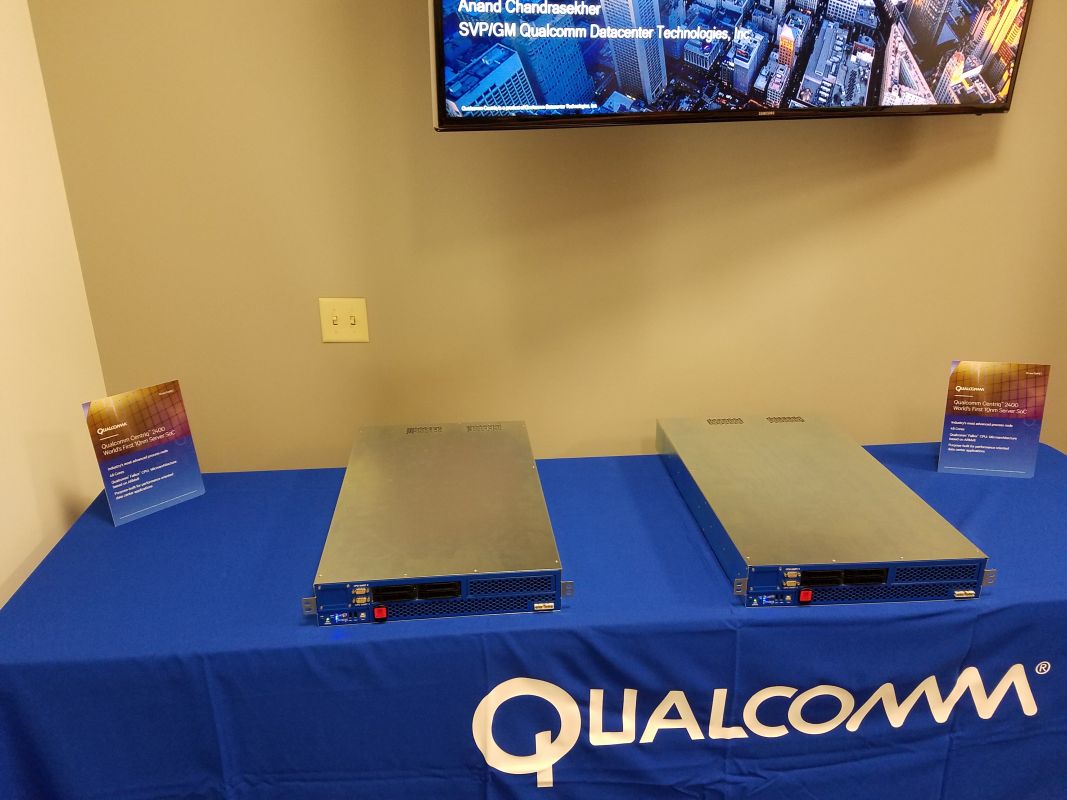 Hadoop is an open source, Java-based programming framework that supports the processing and storage of extremely large data sets in a distributed computing environment. Qualcomm live demo included a solution that involves extremely large data sets in a distributed computing environment that can give you real-time analysis of USA wide Twitter feeds and find what is trending right now, or what was trending on any given day. This was just one of the things that Qualcomm is ready to showcase today, but the San Jose based event’s point was to prove that Qualcomm has the silicon in good shape and that it is confident enough to demonstrate  server racks populated with Centriq 2400 series.

Fudzilla talked to a few Qualcomm executives including Anand Chandrasekher and Dileep Bhandarkar, VP Technology of ARM Server Development, and both pointed out the importance of the big milestone that Qualcomm is the first to have 10nm server part and not the competition. Both Anand and Dileep have worked for Intel on both commercial and server products.

They didn’t want to get into the details which company  manufactured 10nm. Despite the fact that Snapdragon 835 that was announced by Keith Kressin, senior vice president, product management, Qualcomm Technologies for mobile phones is manufactured by Samsung, Anand and Dileep didn’t want to comment on the fabs they used.

There are two viable candidates - Samsung and TSMC - and we have a feeling that TSMC has the stronger chance of being the fab behind the SoC. TSMC simply has more experience in manufacturing big SoCs and chips especially for GPU guys including Nvidia and AMD, and as you can imagine, Centriq 2400 is a big chip, the biggest that Qualcomm has ever made.

This is an important milestone for Qualcomm as the company is trying to get more traction on the server market, promising commercial availability in the second part of 2016. From what Fudzilla knows, Intel doesn’t have any chance of bringing a 10nm based solution to the market in the same timeframe. Intel is getting ready to launch a Skylake EP to replace the Intel Xeon Processor E5 v4 Family based on Broadwell 14nm process and there is no 10nm on site, at least not that we are aware of.

A lot of questions needs to be answered, but Qualcomm made an important step in the right direction and we will hear more about the Centriq 2400 in 2017. It looks like 2017 will bring a lot of disruption as both Zen from AMD and Centriq are about to attack Intel in the server market. Bear in mind that the server market is very profitable and that Intel owns close to 97 percent of the market and will probably go down in market share because of AMD, Qualcomm and some other ARM based server companies such as Cavium.