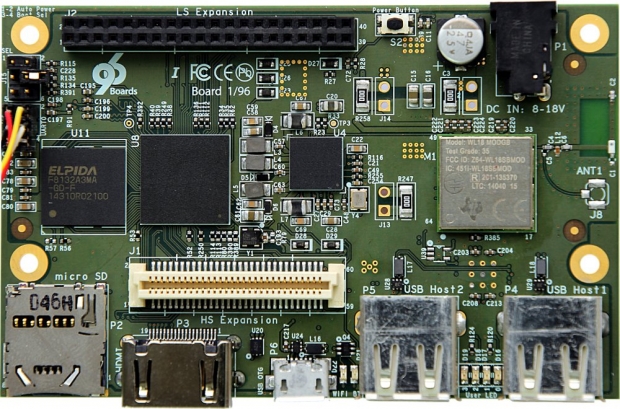 It looks like they will be available in a $129 "HiKey" SBC, featuring a Huawei octa-core Cortex-A53 SoC.

Linaro which standardized open source Linux and Android software for Cortex-A processors, now is trying to do the same thing for hardware. Linaro is owned by ARM and many of its top system-on-chip licensees, have launched 96Boards.org which is a cross between a single board computer hacker community and an x86-style hardware standards organisation.

96Boards.org has released a Consumer Edition (CE) of the spec with an 85 x 54mm or 85 x 100mm footprint, and both 40- and 60-pin expansion connectors for stackable boards. This will be followed in the second quarter by an Enterprise Edition (EE).

Avnet and Arrow have opened $129 pre-orders on something 96Boards branded a reference SBC for the CE spec called the HiKey. Marvell is also going to release a 96Boards-compatible product.

According to the Linaro site  what this will mean is a series of specs for small-footprint 32- and 64-bit Cortex-A boards "from the full range of ARM SoC vendors. This will support the mobile, embedded, digital home, networking, and server segments.

Each spec defines a fixed set of minimum functions including USB, SD, HDMI, and standardized low speed and high speed peripheral connectors. Standardised expansion buses for peripheral I/O, display, and cameras "allow the hardware ecosystem to develop a range of compatible add-on products that will work on any 96Boards product over the lifetime of the platform."

Android and Debian Linux builds are available, built on a recent mainline kernel, and the spec supports a wide variety of Linux distros, including Ubuntu and Yocto.

Although 96Boards will support both ARMv7-A and ARMv8-A platforms, the focus is clearly on new 64-bit ARMv8 platforms like the HiKey.