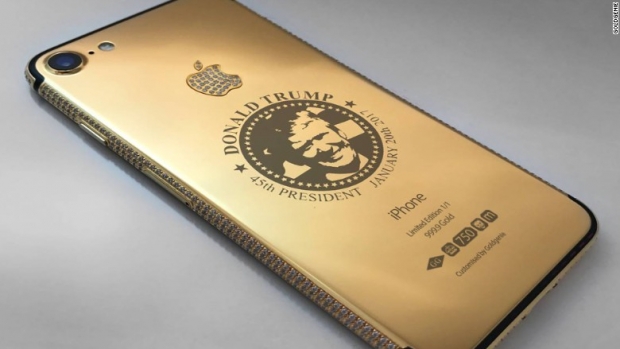 If you had to come up with the world’s worst phone you would have to put the money trapping iPhone 7 close to the top of the list.

Not only does it lack a headphone jack, it forces you to drop another hundred dollars for wireless earphone buds you might lose. In comparison to its often less expensive rivals, it lacks wireless, has a lower res display, lacks USB-C or expandable storage and looks the same as the last one.

Now a Bling outfit in Dubai called Goldgenie has worked out a way to make it even more pointless and stupid.

Firstly, they have encased it in solid gold, encrusted with diamonds. This increases the weight and the price tag to $151,000. The internals are all the same so it really is lipstick on a pig.

Then, to make the phone even less attractive to right-thinking mortals Goldgenie engraved the phone with a picture of Donald (Prince of Orange) Trump. After all who would not want the face of the bouffant sex magnet presented to you every time you make a call?

Frank Fernando, Goldgenie's managing director told CNN that there were very wealthy, high-net-worth individuals all over the world and sometimes it's very difficult to buy gifts for them, because they have everything.

Well you could guarantee that someone would not have that, but then who the hell would want a phone which is so disgusting on so many levels that it causes space and time to collapse in on itself?

Apparently, it was a custom job from a Chinese woman who walked into the store last month and requested that Goldgenie put together the glitzy device emblazoned with the president elect's features.

Fernando thinks the woman’s family wants to give it to the US president elect after his inauguration next month in return for favours. That is fair enough then, a person who would like to see Trump’s features pressed into their phone would be Donald Trump. Its gold bling matches Trump's penthouse apartment in New York.

However, after selling the first one, Goldgenie has received a further nine orders for gold-plated ones bearing Tump’s features. This means that either other rich people think they can get into Trump's good graces by buying him an iPhone or they actually want it for themselves. The whole principle of the trickle down effect was that people were supposed to become so rich that they would invest and provide jobs for poor people, looks like they are spending it on pointless bling instead.