The iPhone 5C is an odd beast. It is one of a handful of Apple products that didn't do well and truth be told we cannot think of a single Apple product since the original iPhone launch that failed to meet expectations. Even the ones we hated from day one, like the original iPad mini, were hot sellers, along with truly exceptional products such as the iPad 3 and iPad Air.

However, the iPhone 5C just didn't tick the right boxes. It wasn't cheap enough to attract new consumers who can't afford a pricey iPhone, while at the same time it wasn't quite as good as the iPhone 5 it was supposed to replace.

Apple apparently thinks it is good enough to replace older iPhones. As of this morning it is selling the iPhone 5C with just 8GB of storage, but the offer is limited to certain markets (Europe basically). The UK store lists it at 429 pounds, while German consumers will have to dish out 549 euro - and this is probably what the rest of Euroland will have to pay for the unapologetically plastic iPhone. 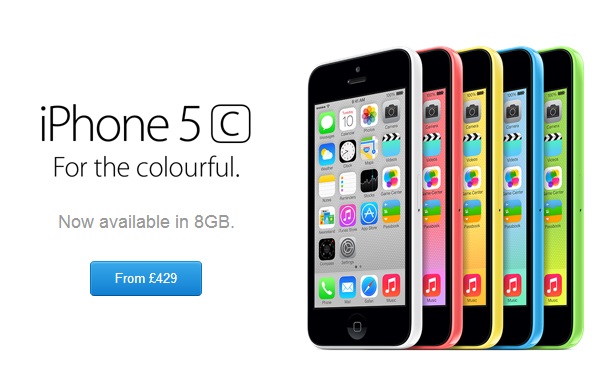 The iPhone 4S is still on sale and we have to admit we have a soft spot for the 4/4S. It was a gorgeous piece of hardware when it launched, but time has taken its toll and it just doesn't cut it anymore. The 4S is 349 pounds in Blighty and 399 euro on the continent. This makes the new 8GB iPhone 5C a lot more appealing - as the 16GB version costs £469/€599.

Of course, we are talking about retail, off-contract prices.

The gap is closing and the iPhone 4S is about to fade away soon, but it's not like the new 8GB iPhone 5C is a bargain. Although it's the price gap isn't as wide anymore, it is still not easy to recommend, and that would be an understatement, as €350 will buy you a Nexus 5 or Galaxy S4 in European retail.