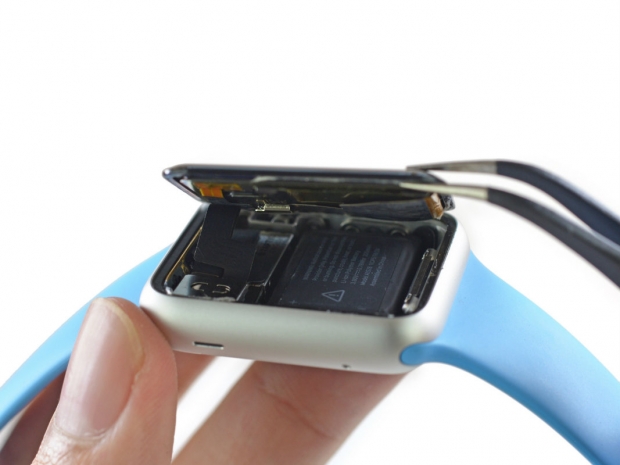 Model 1553 has S1 chip beneath the plastic

Apple is officially starting to ship to pre-orders and if you are one of the early adopters your Apple Watch might be in the mail as we speak.

iFixit is famous for taking brand new (and expensive) products apart telling if you and how you could repair them. The good thing about Apple Watch is that there is a small chance that you can drop it and break the screen, but you can still smash it accidentally against walls, or scratch it.

Apple watch is full of tiny details and small parts, and there are obviously no mechanical watch parts in there. It is all digital, but a bit fancier than what you would find in your 1985 Casio digital watch.

The brain of the watch is now called System in Package (SIP) and not the SoC (System on chip) for an obvious reason. The mystical S1 probably has a lot of Apple A5 DNA, as well as the same or similar GPU, which would explain why Apple doesn’t really have the best battery life in class.

You need 20 steps in order to take the S1 out and iFix also took a close look at the back cover of the S1 System in Package (SIP). It turns out that this is a metal looking plastic.

Unfortunately our first look is obstructed - that S1-emblazoned silver cap isn't a cap at all. It's a solid block of plasticky resin, hiding treasures deep within.

The Apple Watch also comes with tiny Analog Devices AD7166 ARM Cortex M3-based Touchscreen Controller and the digital crown has an encoder mechanism similar to the one from Nest Thermostat. The encoder reads the spinning of the digital crown.

Rotary encoders work by translating the angular position of a shaft into analog or digital code that computers can understand.

The bottom of the watch has pulse-pounding sensor and lens in order to try to measure your heart beat. All in all, it looks rather complicated to repair, and we urge you not to try to take apart yours at home.