AMD FirePro S9150 is the most powerful server GPU for HPC

AMD has released an interesting product that might help it boost its position in the High Performance Computing (HPC) market.

From Hawaii with love

The card comes with 16GB GDDR5 memory, a 512-bit memory interface and up to 320 GB/s memory bandwidth. The card has 2816 stream processors placed in 44 GCN (Graphics Core Next) compute units. It supports external error correcting mode memory (ECC) and it ready to support OpenCL 2.0. The final version of OpenCL 2.0 is coming later this year.

The card's maximum power consumption stands at 235W and it supports AMD STREAM technology. Manufacturers such as Supermictro will offer this cards in server solution configuration including 1U, 2U,3U,4U SuperServer and 7U SuperBlade platforms. 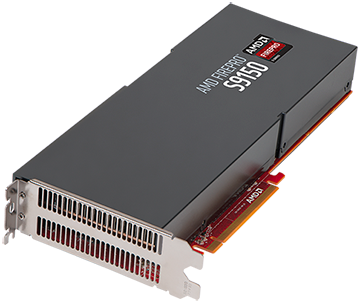 Asus and Gigabyte will also ship this card in their servers and they claim customers will love the energy efficiency and performance-per-watt of the AMD FirePro S9150. This comes as no surprise as Gigabyte and Asus are long time AMD partners and are they've been selling AMD graphics cards since the world was young. MiTAC Tyan business unit will also carry these cards in Tyan servers.

The AMD FirePro S9150 is fighting Intel’s Knights Ferry, formerly known as Project Larrabee, as well as Nvidia Tesla solutions that are both quite great performers and have ECC support. AMD has an external solution but it will probably end up more affordable and will offer better performance per watt.

Both the AMD FirePro S9150 and the slower S9050 server GPUs feature PCIe x16 dual slot form factors and passive thermal solutions more compatible with server environments. It is interesting to note that the server case with a lot of fans can blow as much as 235W from passive graphics cards, but in return you can get some amazing 2.53 TFLOPS double precision performance.

Both cards support AMD STREAM technology which powers the ecosystem that enables AMD FirePro S-Series server GPUs to be used for compute intensive workflows leveraging the massively parallel processing power of AMD GPUs and to accelerate many applications beyond just graphics. Sapphire likes this as now AMD offers both processional workstation and server graphics which means a larger market for AMD and Sapphire. Sapphire will expand to the server compute market as well. 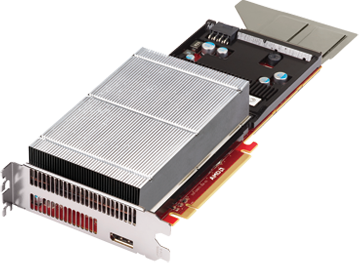 AMD didn’t mention the price, but we expect that the price ends up more affordable than Nvidia and Intel solutions. This news spiked AMD's share and returned the company to above $4 territory as these cards are quite expensive, high-margin products and they can give AMD a foothold in the highly profitable server compute market.