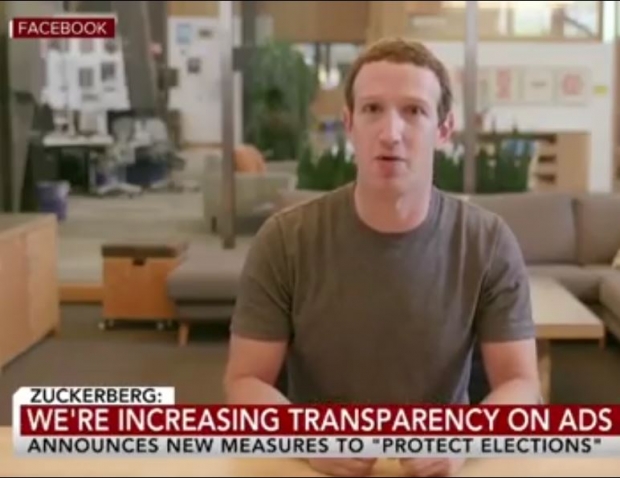 A fake video of Mark Zuckerberg giving a sinister speech about the power of Facebook has been posted to Instagram to test if the company is serious about not removing this type of video.

The video was created by two artists Bill Posters and Daniel Howe and shows Zuckerberg saying things he never said, and uploaded it to Instagram.

The video was created in partnership with advertising company Canny, shows Mark Zuckerberg sitting at a desk, seemingly giving a sinister speech about Facebook's power. The video is framed with broadcast chyrons that say "We're increasing transparency on ads" to make it look like it's part of a news segment.

"Imagine this for a second: One man, with total control of billions of people's stolen data, all their secrets, their lives, their futures", Zuckerberg's likeness says, in the video. "I owe it all to Spectre. Spectre showed me that whoever controls the data, controls the future."

The original, real video is from a September 2017 address Zuckerberg gave about Russian election interference on Facebook. The caption of the Instagram post says it's created using CannyAI's video dialogue replacement (VDR) technology.

This deepfake of Zuckerberg is one of several made by Canny in collaboration with Posters, including ones of Kim Kardashian and Donald Trump, as part of Spectre, an exhibition that took place as part of the Sheffield Doc Fest in the UK.

Instagram said that the video will be treated the same way as all misinformation on Instagram." If third-party fact-checkers mark it as false, it  will be filter it from Instagram’s recommendation surfaces like Explore and hashtag pages.”

Facebook has been forced to take a stance on whether fake or altered images are allowed to stay up on the site. Instead of deleting the video, the company chose to de-prioritize it, so that it appeared less frequently in users' feeds, and placed the video alongside third party fact-checker information.

At the time, Neil Potts, Facebook’s director of public policy, said that if someone posted a manipulated video of Zuckerberg like the one of Pelosi, it would stay up. Now that there's a deepfake of Zuckerberg implying he's in total control of billions of people's stolen data and ready to control the future, on Facebook-owned Instagram, that stance will be put to the test.

Canny's founders, Omer Ben-Ami and Jonathan Heimann, told special effects blog FXGuide that their work comes after algorithms developed by University of Washington researchers, which turned audio clips of people speaking into realistic videos of people made to look like they're speaking those words.

The voice superimposed on the video is clearly not Zuckerberg, but someone attempting an impression. But this deepfake blinks, moves and gestures like a robot who is not from this planet – just like Zuckerberg.