Intel and AMD going after Android

But AMD seems to have the upper hand

Both Intel and AMD are working on dual-OS notebooks and other devices and some of the first products running both Windows and Android have been showcased at the Consumer Electronics Show. However, the companies have two very different ways of going about it and we believe AMD is taking a much more user-friendly approach, albeit a somewhat more risky one.

Intel is all about dual-boot solutions, allowing users to choose the OS when they boot. This approach has an obvious shortcoming, as users need to reboot into a different OS. However, the advantage is that this straightforward approach should allow Intel-based dual-boot systems to run the latest versions of Android with relative ease. It is also a more efficient way of doing it, as there’s no emulation performance penalty.

AMD on the other hand relies on emulation. AMD made a commitment to BlueStacks two years ago, resulting in the AMD AppZone. The BlueStacks emulator does have some downsides, as it is still based on Android 2.3, a woefully obsolete Android version that originally launched in December 2010. Like all Android emulators BlueStacks (and AppZone for that matter) is a work in progress. There are plenty of challenges to overcome and on the face of it Intel should have a comfortable lead in terms of performance and software updates. However, this may not be the case. 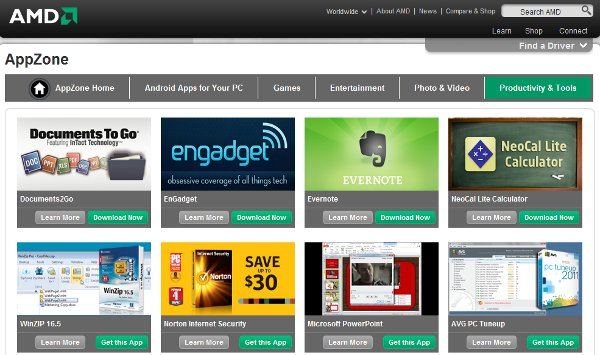 Intel’s performance lead won’t make much of a difference. The average notebook is already too powerful for Android apps, you don’t need a powerful Haswell or Kaveri chip to play around with Android. AMD will pay a performance penalty, but in reality it should not matter as there is plenty of computing power at disposal. Android emulators are evolving and with some investment and tender loving care, AMD should have no trouble developing a stable and fast emulator, based on more recent versions of Android.

More importantly, AMD’s approach will allow users to access Android straight from their Windows 8.1 homescreen like any other Windows 8.1 app. Intel wants users to reboot into Android, which doesn’t sound nearly as convenient. In a recent interview with VentureBeat, Lenovo America President Jay Parker said he does not believe Intel’s idea has a lot of mass-market appeal and we agree – AMD’s way of doing it makes a lot more sense. In addition, AMD’s emulator approach does not require a separate hard drive partition, which is good news for cheap devices with limited solid-state storage.

However, although AMD’s idea will resonate with a much wider audience, we are still not convinced that adding Android support to Windows devices will make much of a difference over the next couple of years, but it might lead to new (and weird) form factors down the road.

Detachables are probably the best bet for dual-OS implementation, as detachables would allow users to run their devices in Windows while in notebook mode and automatically switch to Android in tablet mode. In theory, it could even be possible to develop phones with x86 hardware that would function as perfectly normal Android phones in standalone mode, but they could be docked to a companion device to double as a notebook, or even a desktop. Asus and Motorola have toyed with similar products in the past, but they were only capable of running Android.