Despite a series of big promises and Bay Trail hype, which led many to believe that Intel’s new x86 SoC is the best thing ever for tablets and convertibles, this hardly translated to any significant sale for Intel. Bay Trail based tablets didn't get as much attention as Intel had hoped for, but they represent a nice alternative to Android/ARM based tablets.

It’s too late fox Xmas shopping but Lenovo got its Bay Trail based tablets in the channel and the first units are now available at Amazon, a bit too late to end up under Christmas trees, despite the original listing for pre-orders on November 10th. In addition to a very consumer friendly name, the Lenovo IdeaTab Miix2 has a 1280x800 8-inch screen, , Windows 8.1, 32GB of flash storage, 2GB RAM and 1.3GHz Intel Z3740 quad-core processor. Oddly enough the Amazon listing is riddled with typos and factual errors. (Hm, sounds familiar. Ed)

The resolution is not to die for, but considering that Windows 8 and 8.1 scale really poorly on high resolution screens, so in some way an affordable 1280x800 8-inch touch screen can actually be seen as a good choice. Lenovo promises up to seven hours of battery life and the tablet comes with an 8-megapixel rear and 2-megapixel front camera. It measures 5.2 x 8.5 x 0.3 inches, weighs 0.77lbs (350 grams) and has a 17.5 Watt Hour Li-Polymer battery.

Of course it has Bluetooth 4.0 and WLAN 802.11n, as well as Micro USB, Micro SD, Micro SIM card reader and audio combo. The Micro SIM reader is a surprising part as Lenovo fails to tell you that this tablet comes with 3G or 4G support.

You can get one here. 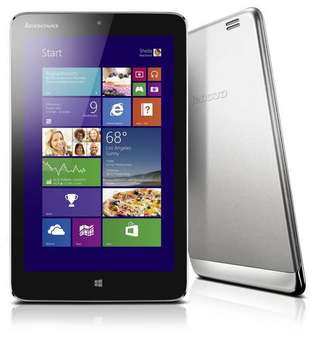 Rate this item
(0 votes)
Tagged under
More in this category: « Acer Aspire Switch 12 sports Core M for €649 LG has Bay Trail tablets in the works »
back to top