Apple announces Mac mini powered by its own chips 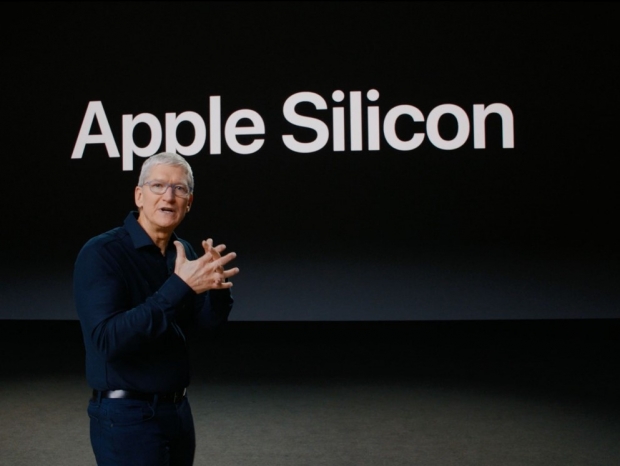 Dumping Intel already costs an ARM and a leg

Fruity cargo cult Apple has announced that it has put its ARM-based chips into a Mac Mini which it is going to rent to developers for $500 as part of its ARM enema to purge Intel chips from its system.

The mini will run on Apple’s A12Z chip — the same one found in the 2020 iPad Pro — and includes 16GB of RAM and a 512GB SSD. It will come preloaded with a beta version of macOS Big Sur and Xcode to help developers ready their apps for consumer Macs when they launch starting later this year. The DTK also has “a variety of Mac I/O ports”.

Apple demonstrated a Mac running the A12Z processor during the WWDC presentation, and it seemed to fare well with Adobe Lightroom, Photoshop, and the company’s own professional apps like Final Cut Pro X.

The Tame Apple Press is making a big thing of the fact that Apple invented the chip and talking about “Apple Silicon” but it is basically a souped up ARM spec.

An example of the tripe being written about the Apple's new chips includes this bit of advertising in Arse Technia.

"So far, Apple's chip division has excelled in every market it has entered. In the world of smartphones, the company's SoCs are easily a generation ahead of the best Qualcomm, Samsung, and Mediatek have to offer. Apple's most dominant smartphone showing is probably the iPhone SE, a $400 iPhone that will out-perform $1200 Android phones thanks to the A13 Bionic SoC."

Apple CEO Tim Cook said the company expects its Intel to “Apple Silicon” transition to in-house chips to be completed within two years.

Tim Cook pegged this switch as one of the four biggest transitions the Mac has ever had. Alongside the more to PowerPC, the move to Intel, and the transition to Mac OS X, ARM will be one of the biggest Mac changes ever. Apple is promising "a whole new level of performance" with a "Family of Mac SoCs".

The transition to ARM from x86 means that some apps will be native and some won't. For mac OS 10.16, Apple says that all of the Apple 10.16 apps are native ARM apps. Xcode developers can "just open their apps and recompile" to get an ARM binary. "Universal 2" is a new type of binary that will run on Intel and ARM macs. Microsoft Office and Adobe's creative suite (Photoshop) were demoed as native ARM apps. Final Cut Pro has an ARM version too, along with a features that run on the "Neural Engine" in the Apple SoC.

Apple says it wants to make sure users can run all their apps on their ARM Mac, even if they aren't native. So, just like with the PowerPC-to-Intel transition, Apple is dusting off the Rosetta brand with Rosetta 2, which is now an x86-to-ARM emulator. This move has been predicted for years, because it lets Apple lock down its hardware, software, and services.