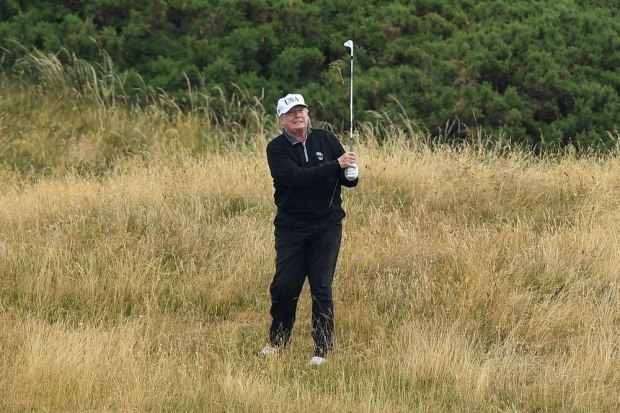 Everything should belong to my golf buddies and supporters

The Trump administration urged the US Supreme Court to reject an appeal by Alphabet's Google, boosting Oracle's bid to collect more than $8 billion in royalties for Google's use of copyrighted programming code in the Android operating system.

The administration weighed in on the high-stakes case on the same day that President Donald Trump attended a re-election campaign fundraiser in California hosted by Oracle's co-founder, billionaire Larry Ellison.

Ellison hosted a golf outing and photos with Trump. The event cost a minimum of $100,000 per couple to attend, with a higher ticket price of $250,000 for those who wanted to participate in a policy roundtable with the president, the Palm Springs Desert Sun reported.

Google is challenging an appeals court ruling that it violated Oracle copyrights when it included some Oracle-owned Java programming code in Android.

The dispute has split Silicon Valley, pitting developers of software code against companies that use the code to create programs.

US Solicitor General Noel Francisco said in a filing with the court Google's "verbatim copying" of Oracle's code into a competing product wasn't necessary to foster innovation.

This would be fair enough if that was what Google actually did. Since the earliest trials, this has all been about what lawyers think is copyright and what developers know is code. What Oracle believes is its code are APIs Unfortunately for Google, only one Judge knew anything about coding Judge Alsup determined that the APIs were not copyrightable in the first place:

"So long as the specific code used to implement a method is different, anyone is free under the Copyright Act to write his or her own code to carry out exactly the same function or specification of any methods used in the Java API. It does not matter that the declaration or method header lines are identical."

He had his decisions reversed on an appeal.

If the Supremes, who to be fair know less about programming than Alsup, rule in Oracle's favour it could cause some serious problems for the programming world. Numerous software programs and libraries, particularly in open source, are developed by recreating the functionality of APIs from commercial or competing products to aid developers in interoperability between different systems or platforms. The likelihood that Oracle will not troll everyone who uses that code is remote.