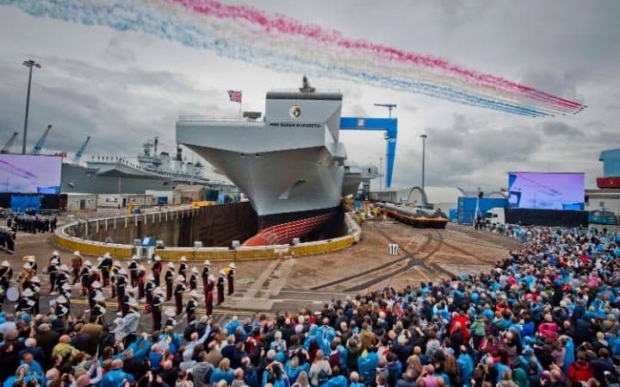 The HMS Queen Elizabeth aircraft carrier cost £3.5 billion but for some reason the entire thing is being powered by Microsoft Windows XP - copyright 1985 to 2001.

Michael Fallon, the Defence Secretary, insisted the ship's systems were safe because security around the computer software on the aircraft carrier is "properly protected". Just like the National Heath Service computer service was properly protected.

He told BBC Radio 4's Today programme: "It's not the system itself, of course, that's vulnerable, it's the security that surrounds it.

"I want to reassure you about Queen Elizabeth, the security around its computer system is properly protected and we don't have any vulnerability on that particular score."

Windows XP is no longer supported by Microsoft, meaning it does not receive updates to protect users from new types of cyber hacks.

Alan Woodward, professor of computing at the University of Surrey went on record saying that if XP was for operational use, it was extremely risky:
"Why would you put an obsolete system in a new vessel that has a lifetime of decades?"

A defence source said that some of the on-board hardware and software "would have been good in 2004" when the carrier was designed, "but now seems rather antiquated".

However, he added that HMS Queen Elizabeth is due to be given a computer refit within a decade.

And senior officers said they will have cyber specialists on board to defend the carrier from such attacks.

HMS Queen Elizabeth, one of two new aircraft carriers for the Royal Navy, is on the Firth of Forth after leaving the Rosyth dockyard near Edinburgh

Cdr Mark Deller, commander air on the Queen Elizabeth, told The Guardian: "The ship is well designed and there has been a very, very stringent procurement train that has ensured we are less susceptible to cyber attacks than most. We are a very sanitised procurement train. I would say, compared to the NHS buying computers off the shelf, we are probably better than that. If you think more Nasa and less NHS you are probably in the right place."

Still for £3.5 billion Teresa May could have bribed 20 more nutty gay-hating, global warming dening, Irish politicians to prop up her government.