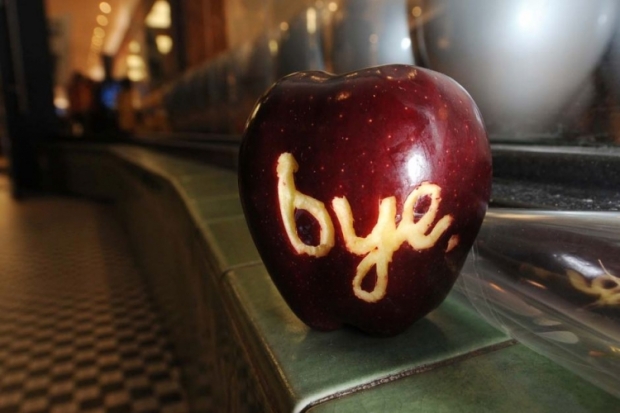 The fruity tax-dodging cargo-cult Apple has really dropped the ball when it comes to hardware and is rapidly losing ground to rivals.

Jobs’ Mobs Mac sales dropped roughly 10 percent amid a declining market which fell 5.7 percent for the year. But Apple’s rivals seem to have benefited from Apple’s failure. Bloomberg analysts Anand Srinivasan and Wei Mok noted that Apple’s rivals grew.
Dell saw the most growth at just over 10 percent.

Apple was pushed to that number by ASUS overtaking it. The top four vendors are now Lenovo, HP, Dell, and ASUS.

These four make up 65.2 percent of the overall market and each grew year-over-year. All this happened while Apple lost ground by declining to 7.1 percent. The other 27.7 percent of the market is comprised of more than 200 vendors.

Bloomberg predicts that the market will consolidate. Samsung and Fujitsu are reported to be in discussions to sell their PC businesses to Lenovo.

Apple has even been losing ground to Microsoft which has been poaching customers so that they switch from the Surface clone that Apple created to the much better real thing.

Srinivasan and Mok suggest that Apple needs to find new markets with their high priced computers to continue growth. They might find an easy mark with the growing middle class in China but they are still in the high price-range relative to other PCs. While American buyers are that dumb enough to fall for Apple’s marketing, the Chinese are a little more cost conscious. Any Chinese buyer looking at the spec will be aware that they are paying too much for the logo on the clam shell.

Apple needs its US and developed countries in Europe, to improve. These represent 63 per cent of its market and are where people have more money than sense.

Last modified on 26 January 2017
Rate this item
(0 votes)
Tagged under
More in this category: « Voice assistants are a priority in smartphone launches Noctua announces free upgrade-kits for AM4 socket »
back to top