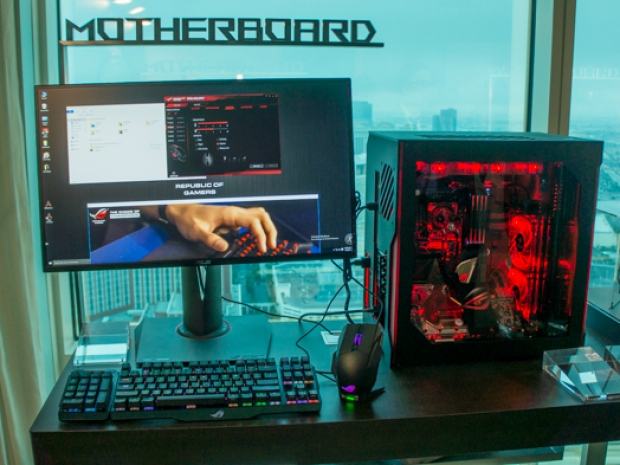 This year, ASUS is celebrating 10 years since the launch of its Republic of Gamers (ROG) brand. We walked into the ROG briefing room and were immediately met with an awesome custom-built Lego set to celebrate the company’s decade-long entry into the high-performance enthusiast gaming market. 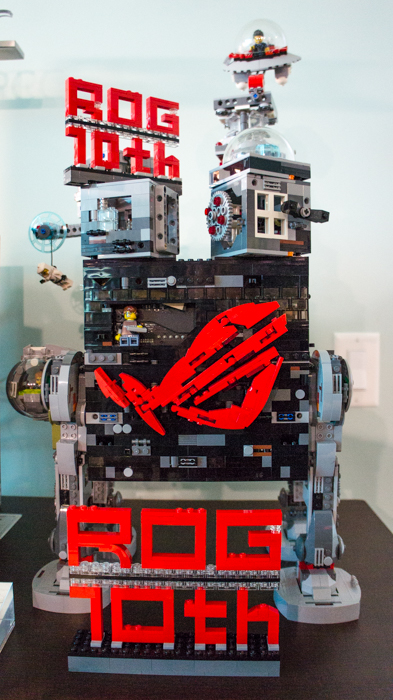 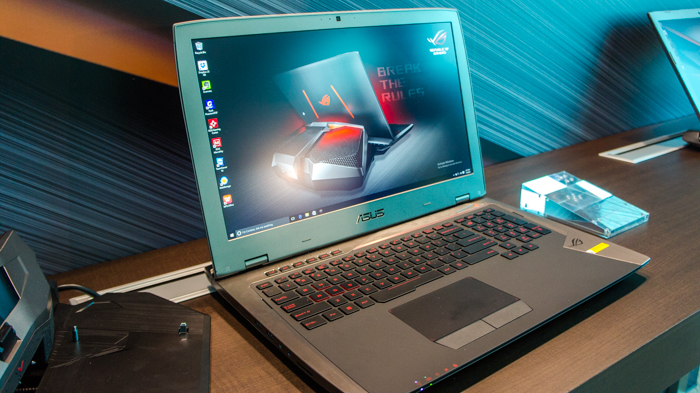 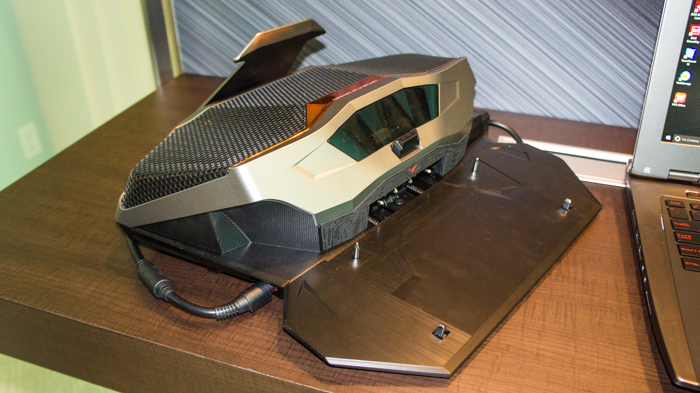 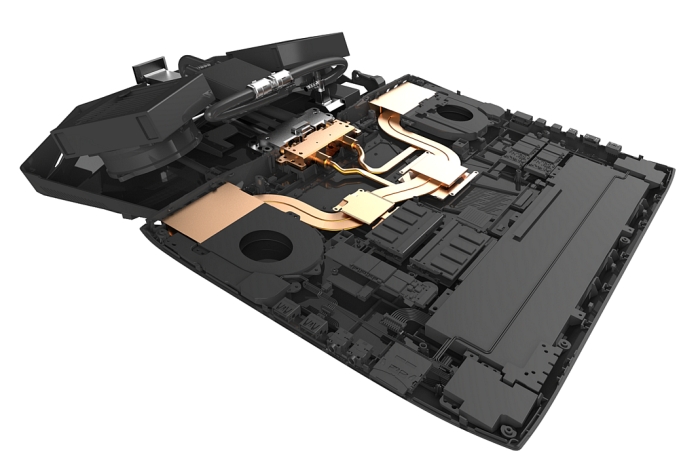 In the company’s internal benchmark testing, the Core i7 6820HK CPU can see up to a 48 percent improvement with a 4.0GHz base clock and the GTX 980 GPU can see roughly a 43 percent improvement as well. ASUS says this should give gamers a “true” 4K experience with most of the latest titles averaging around 40 frames per second. 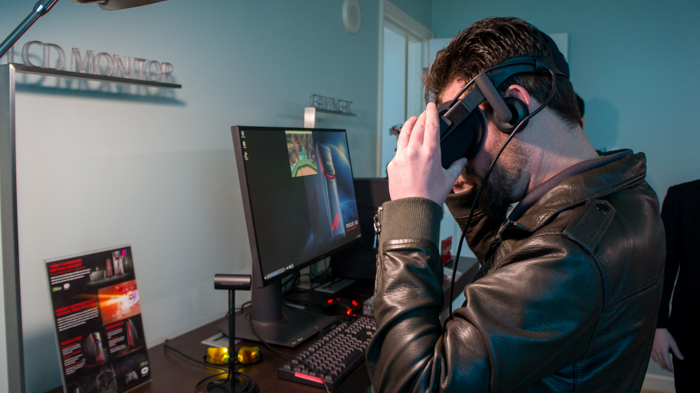 Of course, at CES 2016 every system manufacturer wanted a piece of the VR market space and this year ASUS is no exception. The company unveiled its new virtual reality-optimized ROG GT51 gaming desktop with an unlocked Intel Core i7 6700K Skylake processor, two Nvidia Geforce GTX Titan X’s in SLI, 64GB of DDR4 memory (overclockable) and a USB 3.1 (Gen II) Type-C 10Gbps port on the front panel. The GT51 also features the exclusive “ROG Band” feature to let users overclock the system and to activate Shadow Drive, a hidden space on the hard drive. The system also includes ASUS ROG Turbo Gear software to unlock the GT51’s full overclocking potential with just a single click, while the “Aegis II” application can monitor system parameters. 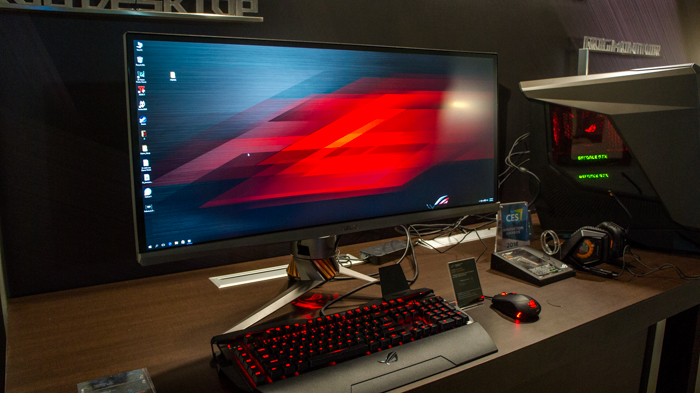 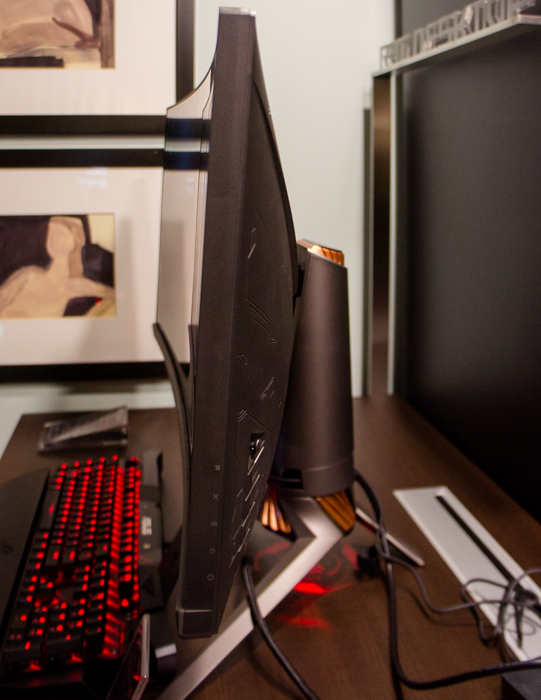 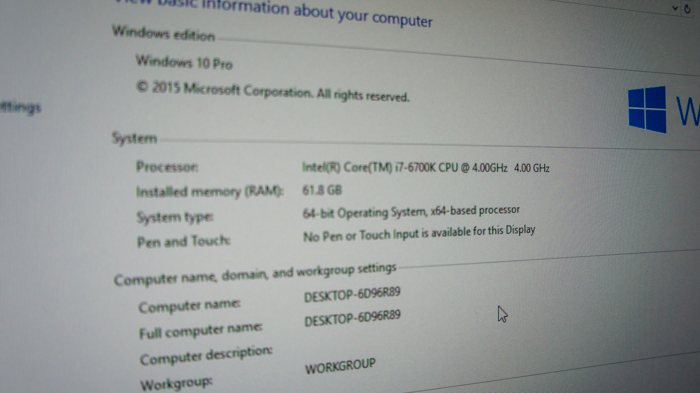 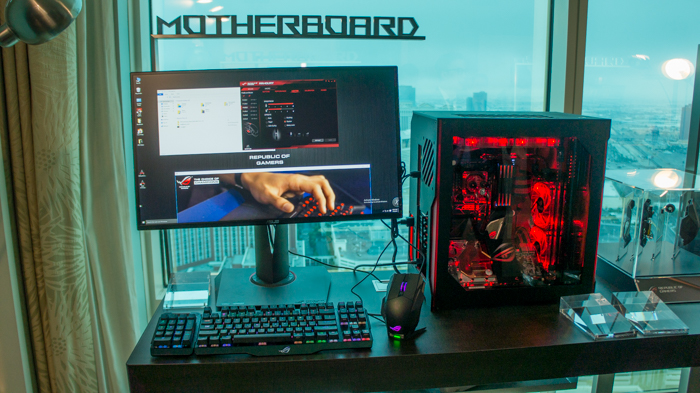 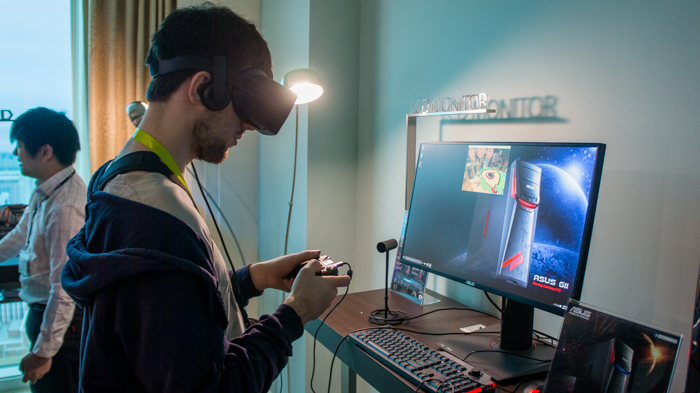 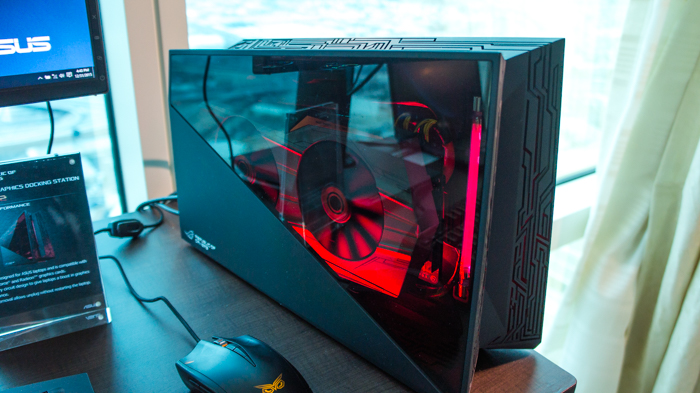 The ROG XG2 is an external graphics card docking station specially designed for ASUS laptops and is compatible with Geforce and Radeon graphics cards. The device features a proprietary circuit design that allows a notebook with Intel Thunderbolt 3 40Gbps ports to plug in to the external docking station and harness the power of a full desktop GPU. This docking station can also simultaneously charge the laptop, thereby eliminating a redundant notebook power adapter for high-performance gaming. The ROG XG2 can also be unplugged without restarting the laptop. 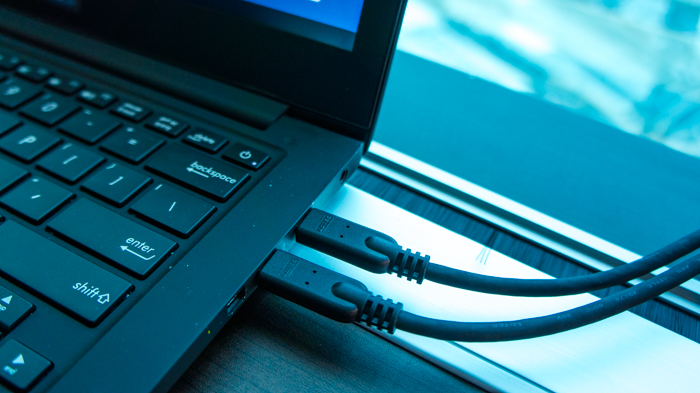 Needless to say, we have seen external GPU setups in the past running over Thunderbolt 2 connections. That specification only allowed up to a maximum of 20Gbps bandwidth. In comparison, Thunderbolt 3 doubles this limit to 40Gbps, while a single PCI-E 3.0 x16 slot offers 128Gbps. In the future, of course, we may see ultra-wide bandwidth, low-latency interconnects up to 100GB/s and 200GB/s from AMD and Nvidia to overcome the limitations of PCI-Express. But these solutions are catered more towards high-performance supercomputing deployments for now and may take some time to trickle down into the consumer market. 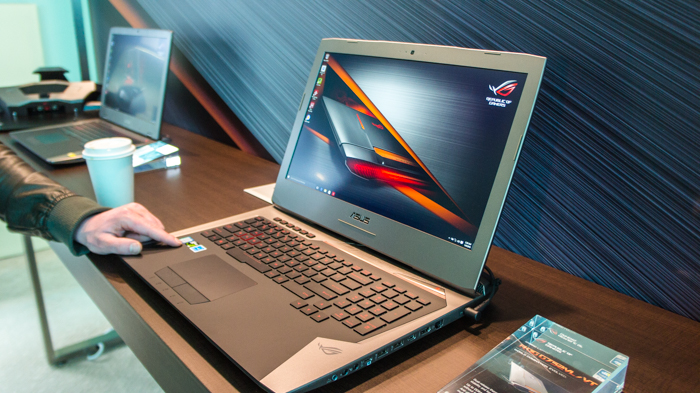 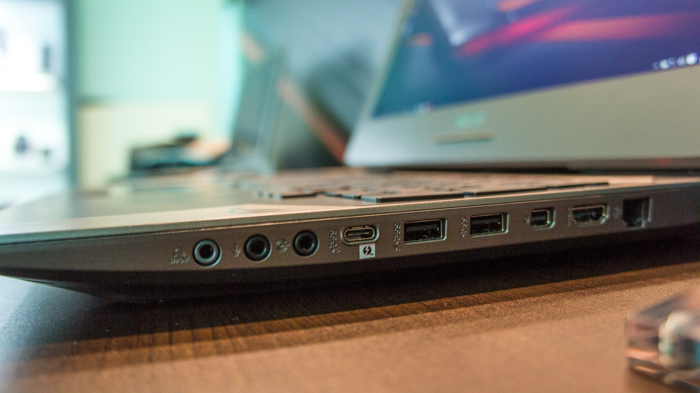 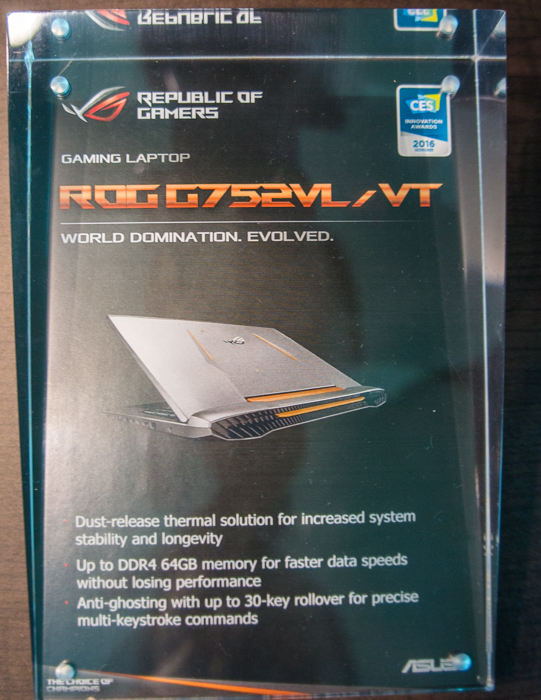 The device measures 428mm wide by 333mm long by ~43mm thick (16.85  x 13.11 x 1.69 inches) and weighs in at 1.83kg (4.04 pounds) with a 6-cell, 67Wh battery. According to NotebookCheck’s review, however, battery life for the G752 is below average for a gaming notebook. The site measured the device in at just under 2 hours when sitting idly on the desktop in Power Saver mode and on minimum display brightness.

Nevertheless, the G752 has an aggressive design that shows off the new ROG Armor Titanium and Plasma Copper color scheme. It also features a backlit, anti-ghosting gaming keyboard with 30-key rollover for precise input.

If you upgrade to the G752VY series with a Geforce GTX 980M 4GB or 8GB GPU for just $400 to $1000 more, you will also receive ASUS’s exclusive “3D Vapor Chamber” cooling design. This system introduces a larger chamber that acts as a reservoir for liquid cooling in the heat pipes. 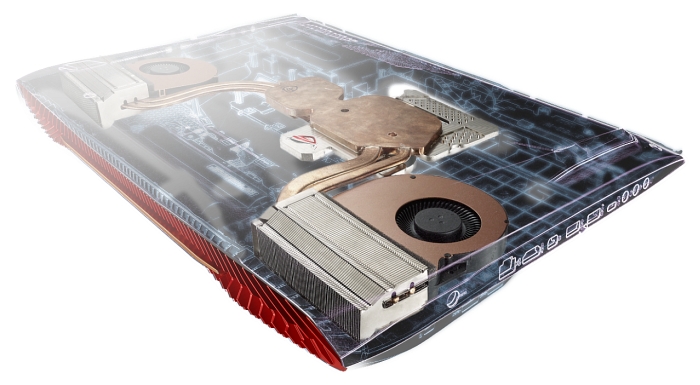 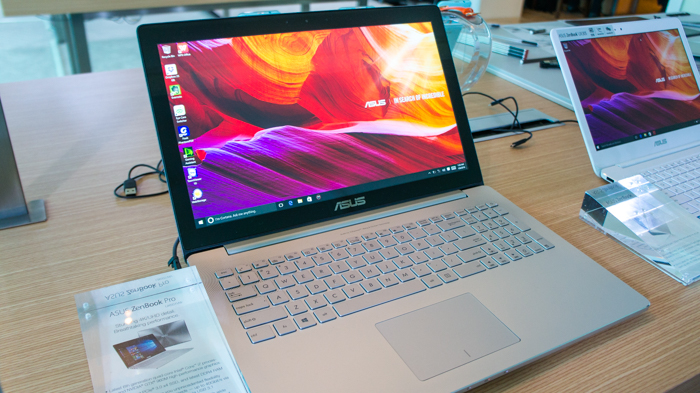 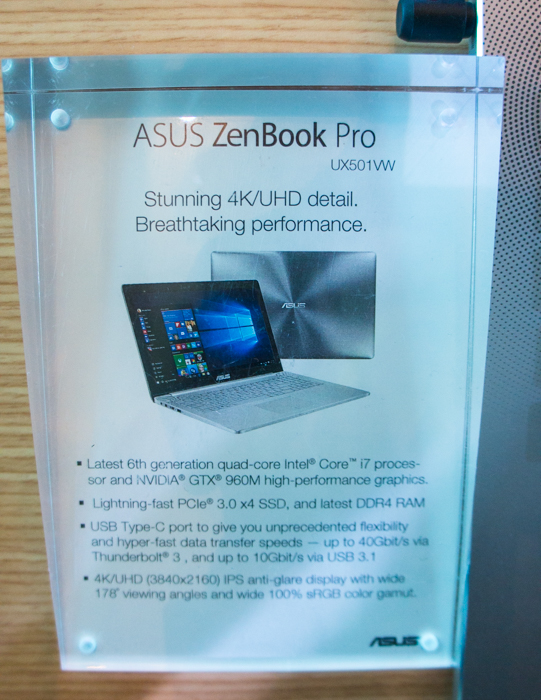 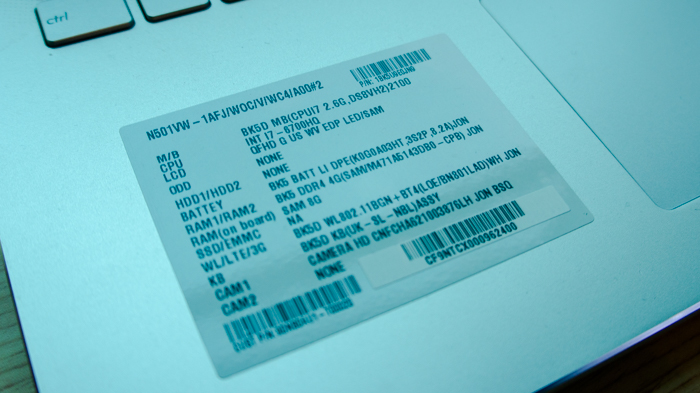