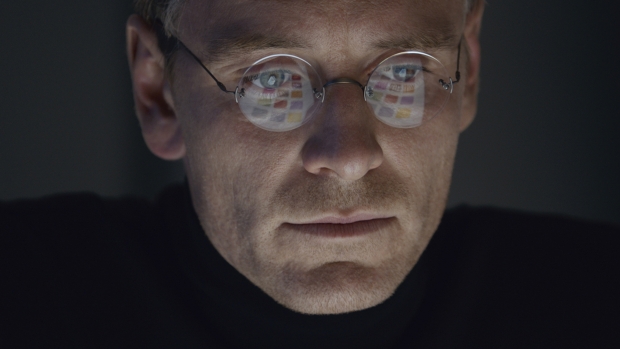 Jobs is apparently still spinning in his grave

The writer of the new Steve Jobs movie has counter attacked against Apple’s moves to have the film canned saying that his “conscious was clear” and the film was pretty accurate.
Speaking at last night’s European premiere at the London film festival, the screenwriter said certain manipulation had to occur to make the film.

“Steve Jobs did not, as far as I know, have confrontations with the same six people 40 minutes before every product launch,” he said, during a press conference. “That is plainly a writer’s conceit. But I do think that the movie gets at some larger truths, some more important truths than what really went on during the 40 minutes before product launches, which I don’t think was the stuff of drama. What you see is a dramatisation of several personal conflicts that he had in his life, and they illustrate something, they give you a picture of something. Are they fair? I do believe they’re fair. My conscience is clear.”

Apple and Steve Jobs’ widow Laurene Powell did their best to kill off the film http://www.theguardian.com/film/2015/oct/08/steve-jobs-widow-leonardo-dicaprio-christian-bale-not-to-take-biopic-role which shows its Messiah as a self-obsessed megalomaniac who never invented anything and refused to acknowledge his daughter even though he had piles of cash. Effectively the all claimed it was a hatchet job and insist that the world should accept their version of Steve Jobs, who apparently could walk on water.

The flicks’ writer Aaron Sorkin has claimed his “conscience is clear” over the portrayal of Steve Jobs put forward in the new Oscar-tipped drama about the key moments in the Apple icon’s life.

“While Mrs Jobs, Laurene Powell, did from the get-go object to the movie being made, his daughter Lisa Jobs did not, and she’s the one portrayed in the movie,” Sorkin responded.

There has also been support for the film from those who knew Jobs, including former Apple CEO John Sculley, played by Jeff Daniels. And Steven Wozniak, who did most of the real inventing at Apple.

The film has already been predicted to be a success at next year’s Oscars, with director Danny Boyle, Sorkin, Michael Fassbender and co-star Kate Winslet all in the running for awards. Looks like those actors and studios who turned it down at Apple's insistance will be kicking themselves.