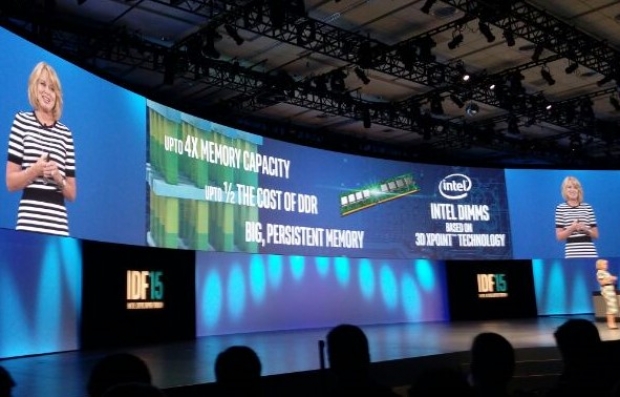 Intel's Queen of Big Data has just announced that the first 3D Xpoint based memory will be in the DIMM modules.

Diane Bryant, senior vice president and general manager of Intel's data centre group said that 3Dxpoint memory will offer a huge capacity increase and will drive significantly lower cost per gigabyte compared to what we see in the shops now.

3DXpoint will offer up to 4X bigger capacity and up to one half of cost of DDR memory. This will get persistent memory close to the CPU. Intel didn't mention anything during the presentation about alternative storage such as SSD based 3D Xpoint but our sources at the company told us this is coming too.

This DIMM won't be cheap. From the render picture it looks like you will have eight chips per module, on one side, but we expect to see chips on both sides. The largest DIMM developed by Hynix has 128GB per module for server ultra-high density market. You can expect 512GB DIMM modules to show up and imagine how fast they will be.

The new modules will be electrically and mechanically compatible with the existing memory sockets but we expect that the servers will get new firmware or motherboards to enable the use of 3DXpoint.

3DXpoint memory enables 6 TB DIMM based systems and if our math is right, you will see 12 DIMM modules with 512GB each.

Last modified on 20 August 2015
Rate this item
(7 votes)
Tagged under
More in this category: « Apple Music losing customers China presses ahead with glorious five year tech plan »
back to top