Based on a mATX form-factor, the new EVGA X99 Micro features the 10-phase VRM design, four DDR4 memory slots on each side of the LGA2011-3 socket with support for up to 64GB of DDR4 memory, on-board power and reset buttons, LED POST, six SATA 6Gbps ports, three PCI-Express 3.0 slots, bunch of USB 3.0 adn USB 2.0 ports, as well as a single mSATA slot placed between PCI-Express slots. 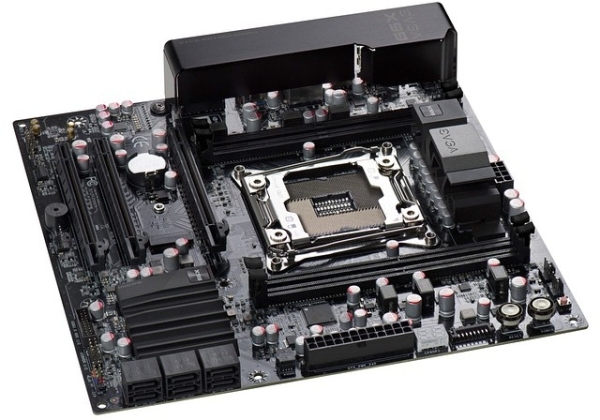 While it lacks some features seen on bigger ATX form-factor motherboards, like the new SATA-Express port, we are quite sure that this one will be quite popular for high-performance SFF rigs.

Earlier rumored price for the EVGA X99 Micro puts it at somewhere around US $250, which is not bad for a feature-packed mATX high-end motherboard, especially considering that the X99 Classified should retail at around US $400.

Last modified on 22 August 2014
Rate this item
(0 votes)
Tagged under
More in this category: « EVGA teases X99 chipset motherboard at Computex 2014 EVGA unveils its X99 motherboard lineup »
back to top