AMD has finally launched three 45W Kaveri SKUs, which were in the works for months. The three chips feature configurable TDP, which means they can run at 45W or they can be pushed to 65W. The TDP can be adjusted by the user with relative ease.

The A8-7600 was the first 45W/65W Kaveri to be announced, but it took AMD almost six months to actually bring it to market. We had a chance to review the A8-7600 and we found it to be a relatively good deal. In the meantime AMD has slashed the list price to $105 a pop, which means it delivers even more value. It is a quad-core part clocked at 3.1/3.8GHz and it features Radeon R7 graphics with 384 shaders clocked at up to 720MHz.

The new chips are still not widely available, but we managed to find all three of them in stock in Europe. 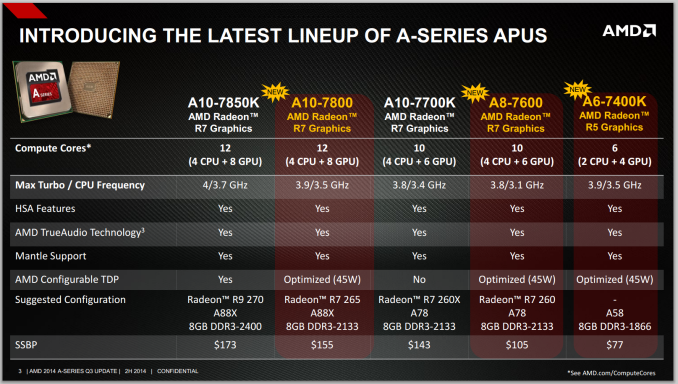 Rate this item
(0 votes)
Tagged under
More in this category: « Desktop Broadwell LGA is Socket 1150 Desktop Braswell is dual or quad 14nm »
back to top