First we take Manhattan, then we take Berlin

Berlin is the first 28nm-based CPU and APU product from AMD for the Opteron server market and this APU is supposed to replace Opteron 3300 series based on 4 to 8 Piledriver cores. Berlin has four Steamroller cores, but its APU supports HSA and it theoretically should be able to run some parallel computing applications much faster.

Going parallel on a single die

AMD sees this as a significant step forward “in expanding the footprint of x86 APU accelerated performance within the data centre."

We could not agree more as many server applications will really enjoy the ability to do parallel tasks via HSA much faster than with traditional x86-only server processors. It is bringing the best of both worlds in a single package, as it offers x86 compatibility and parallel GPU computing on a single die.

AMD is unique in being able to offer something like this, especially since Intel’s integrated GPU doesn’t really do parallel computing at this level.

The official launch of Berlin is expected later this year and AMD plans to demonstrate software based OpenCL and OpenGL on Berlin. 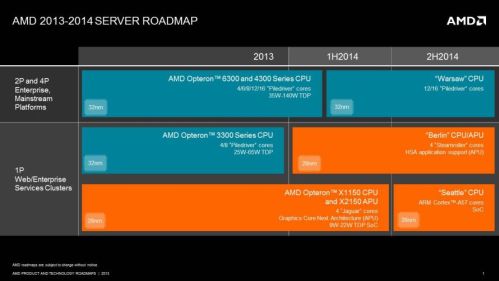 Rate this item
(0 votes)
Tagged under
More in this category: « Intel tablets are the new black for some OEMs GlobalFoundries and Samsung team up for 14nm FinFET »
back to top