Google’s Chrome OS is making headway, mostly thanks to Chromebooks. There are a few desktops, like LG’s Chromebase and Samsung’s Chromebox has been around for a couple of years, but they never gained much traction.

Asus is hoping to change all that by going cheap, very cheap. The cheapest version of its new Chromebox is priced at $179 and it’s powered by a Celeron 2955U processor. Core i3-4010U and Core i7-4600U versions are coming, too. All three parts are Haswell based and they have a relatively low TDP of 15W. This also means the units are fanless.

There will be a few different SKUs with 2GB or 4GB of RAM. The Asus Chromebox ships with 16GB of M.2 SSD storage, but you also get 100GB on Google Drive for two years. Connectivity is not an issue, either. The system features an SD card reader, USB 3.0, Bluetooth 4.0 and a/b/g/n wireless. It relies on DisplayPort and HDMI for video output.

The price seems fair, after all $179 will hardly buy you a complete Windows system. However the Intel NUC isn’t much pricier in some scenarios, if you are willing to go with the cheapest Bay Trail or Haswell versions and use a tiny mSATA drive. 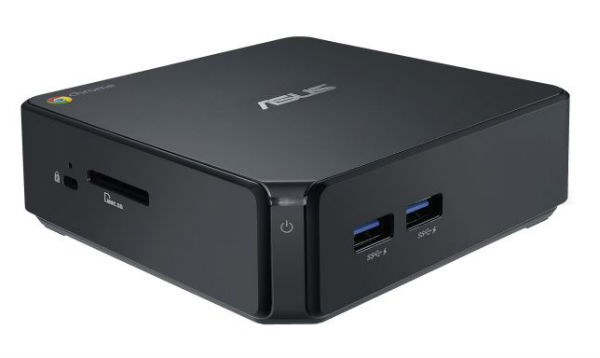 Rate this item
(0 votes)
Tagged under
More in this category: « Kinect support no longer required Rockwell Collins buying ARINC »
back to top