A couple of months after Intel launched its first NUC systems, Gigabyte entered the fray with its diminutive Brix barebones. Measuring just 107x114x29mm, Brix boxes are about the same size as Intel’s NUC, but they have a few things going for them.

First of all cheap Intel NUC barebones do not feature USB 3.0, which is standard on Brix units. Secondly, you can’t exactly get an AMD APU in an Intel system.

The new Brix GB-BXA8-5545 does just that – it is not based on a Haswell or Celeron processor, it features AMD’s A8-5545M APU. This is of course a Richland based part, with four CPU cores clocked at 1.7GHz, but Turbo Core can bring them up to 2.7GHz, which is not bad for a 19W part. Best of all, it features Radeon HD 8510G graphics, with 384 VLIW4 cores. Although 384 cores sounds like a lot, bear in mind that this is an ULV part, so the GPU is clocked at a relatively modest 450MHz, although it can hit 554MHz on Turbo. Basically it should be as fast as entry level discrete cards from a couple of years ago, like the HD 5570 or GT 620.

Still, this is very impressive for such a tiny system and the price is very competitive, too. According to early EU listings, Gigabyte wants just €249 for the Richland powered Brix. This makes it about 20 percent more expensive than a Jaguar A4-5000 barebones mini PC from Zotac. As for Intel NUC kits, you can get a Core i3-4010U system, i.e. a dual-core Haswell clocked at 1.7GHz with Intel HD Graphics 4400.

Sadly we still don't know much about AMD's Kaveri ULV plans, but thanks to better thermals we expect to see quite a few AMD-based mini PCs later this year. 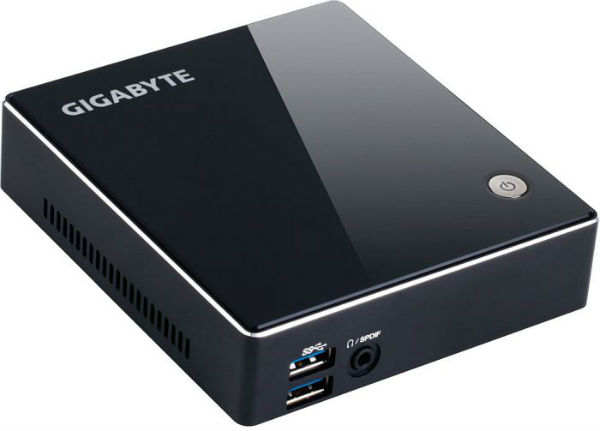