Many gamers have been experiencing issues with the highly anticipated Battlefield 4 game. AMD graphics card users witnessed the red screen of death under Windows 8 and AMD has already released Catalyst 13.11 Beta8 to address this issue.

Some users on forums have reported Windows 7 issues and we experienced some first hand over the weekend. It affects Nvidia cards, too, with 331.65 drivers in single player. What happened occasionally was that the game would simply stop loading after the cut scenes.

You would have to kill the game task, restart the game again and it would continue working. We haven’t seen the bug in early stages of the game, it happened in the 4th campaign but it suddenly stopped shortly afterwards. It crashed the game maybe five times and it was gone after these couple of the cut screens.

DICE suggest that you should install clean PunkBuster by removing the original one installed, repair Battlefield 4 installation in Origin client and get the latest drivers from Nvidia and AMD for your graphics card. This should do the job and if not we found a lengthy post directly from DICE that hast the list of things that got fixed in the third update or that are under investigation.

Server related bugs including Server crashes, fixing the server queues on PC and fixing server crushes R6 are among things that are fixed. Game crashes and freezes are eliminated as soon as they find them, Progress in Multiplayer Lost and Single Player Save File Corrupted are currently under investigation. You can check the list here.

The fix is coming. 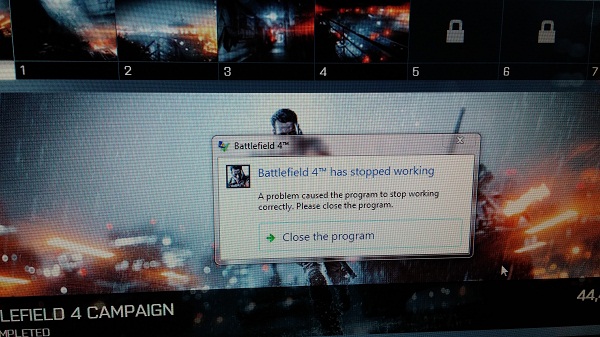 Last modified on 04 November 2013
Rate this item
(0 votes)
Tagged under
More in this category: « Bug plagues Arkham Origins Peggle 2 to miss Xbox One launch day »
back to top