Forget the R9, the R7 spells trouble for Nvidia

AMD’s new Radeons are just weeks away, but the company disappointed quite a few fans by refusing to reveal the exact specs of its R7 and R9 cards at the Hawaii event. All we know for sure are a few prices, the memory size and a single official benchmark result per card.

However, although AMD wasn’t very specific, Radeon boss Matt Skynner duly noted that AMD's R7 cards are basically better than anything the competition has at this point, both in terms of pricing and bang for buck. Skynner wouldn’t be writing cheques AMD’s new cards can’t cash, so let’s take a look at what might be about to happen in the mid-range and low-end. 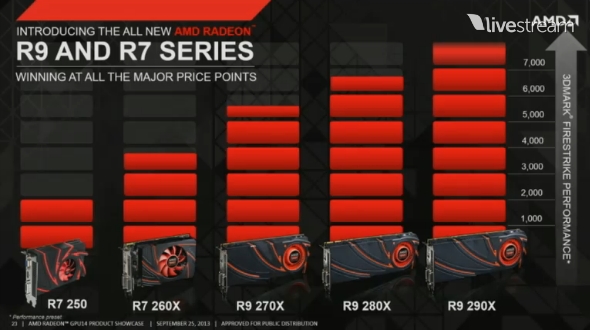 Nvidia’s line-up in the sub-$200 segment doesn’t look very impressive at all, just multiple flavours of ageing 600-series products. Even if we look a notch higher, the $249 GTX 760 doesn’t have a direct competitor, unless the cheaper R7 270X can beat it, but even if it can’t a potential R9 280 based on the venerable Tahiti Pro chip could.

Nvidia AIBs will clearly face a lot of pressure in all segments covered by the R7 series, be they entirely new products or tweaked rebrands. Digitimes is reporting that graphics card players are already pressuring Nvidia to slash some prices and possibly even introduce one or two new products in the $149 to $249 range. The question is what? Another couple of GK104 and GK106 cards just won’t do it and cutting prices to counter the R7 series seems to be the only option, with everything it entails. Meanwhile, AMD still has a couple of products to introduce, two Oland and Curacao boards.

It’s starting to look like a cold, long winter for Nvidia in the mid-range, never mind the R9.

Now for a small digression. The R7 Semyorka was the world’s first ICBM. It carried Sputnik into orbit and it caused quite an arms race, not a price war. Khrushchev boasted that the USSR was rolling them out like sausages. A few years later U2 over-flights revealed the truth – only four fully functional R7 launch sites were ever constructed. The “missile gap” arms build-up cost US taxpayers billions and it was all for nothing, as much of the new weapons deigned to combat the Red menace were obsolete as soon as they rolled off the assembly line.

If Nvidia is forced to slash prices on practically all of its non-GK110 line-up, the move could end up costing its shareholders a pretty penny, too. What’s more, without proper new products, the cuts might be in vain.