Cebit is still the world’s largest trade show and this year it is expected that some 400,000 people will turn up at this event, based in Hannover, Germany. Microsoft was one of many to hold a press conference the day before the show officially starts and naturally Redmond talked about services, hardware as well as software.

A part of the press conference that was held in German (many visitors and press would rather hear it in an English ed. ) what has caught our attention is the fact a managing director of Microsoft Germany Christian Illek said that Microsoft sold 60 million Windows 8. It gets even better, as he continued with the claim that Windows 8 has a faster start than Windows 7. This only makes sense if Microsoft counts upgrade numbers, where it was providing Window 8 upgrades for peanuts. The number was quoted back in January and interestingly enough it didn’t change.

The 60 million figure comes from upgrades and OEMs sales for new PCs, but we are not sure if it includes Windows RT. We expected the number to grow a bit faster. It is interesting that Microsoft thinks that it’s time to get away from desktop and jump into the future, which is pretty much confirming what Apple and Google have been doing for a while with a mobile touch revolution of their own. 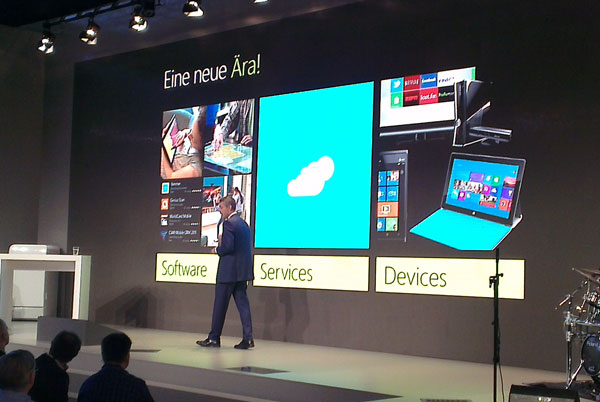 Microsoft thinks it can push Win tablets and notebooks to enterprises offering business users the look and feel of proper Windows 8 applications. Let’s see how that goes. Having phones, Surface tablets, notebooks and hardware partners, as well as a host of services, should be Microsoft’s idea of success. Let’s see how that goes as Apple got under too many skins with its iPad, which was nothing less than an unbelievable success.

Apparently the Surface Pro sold out in 128GB variant in USA and Germany will get this tablet at some point in Q2 2012 at price that should be similar to US, albeit with the euro currency sign in front.