Although it was not as loud as Intel or Nvidia, AMD had quite an interesting thing to showcase at the MWC 2013 in Barcelona, its quad-core Temash-based 13-inch 1080p tablet with Turbo Dock. According to some of first hands-on experiences the prototype is definitely an interesting idea, especially when paired up with AMD's Turbo Dock.

The idea behind the Turbo Dock is quite interesting as it pretty much provides the best of both worlds by giving tablet a longer battery life and passive cooling and quite an improved performance when it is plugged in its Turbo Dock. The prototype device is built by Compal and when compared to Intel's tablet offerings, which AMD gladly provided during MWC preview, provides an impressively better GPU performance and can easily cope with some graphics demanding games. According to AMD, docked Temash tablet can even beat an Intel Core i5 equipped device in some tests.

The Turbo Dock actually brings a performance boost by allowing the APU inside to pull 15W instead of the 8W limit in the tablet mode. In addition to the performance boots it will also provide additional cooling to the tablet by delivering extra airflow while the tablet itself can be passively cooled.

The prototype device is certainly impressive and all we need now is to see some design wins and actual devices expected to show up sometimes around June or July this year. 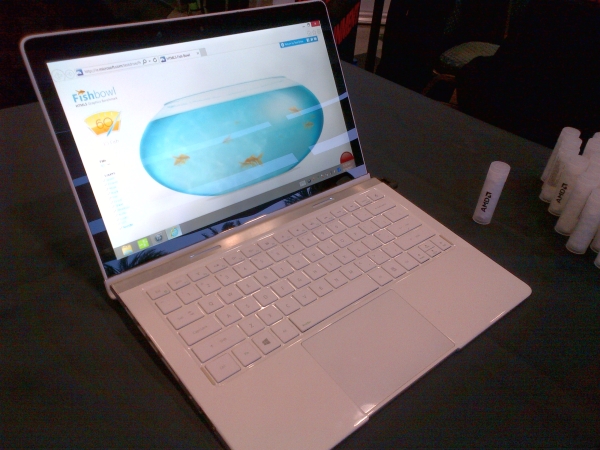 More in this category: « Acer changes its mind on Windows RT Asus Transformer TF300 gets Android 4.2 update »
back to top