We reviewed a number of nettops over the year, including several Sapphire Edge systems based on Atom, Brazos and Celeron chips. Although we love the idea of tiny, power efficient boxes for the living room or small office, none of them are a great choice for true enthusiasts as they simply don’t offer enough performance. Being an enthusiast oriented brand, Sapphire knows this as well, so it came up with something a bit beefier in the same form factor.

The Edge VS series is based on AMD Trinity chips, a far cry from underpowered and cheap Brazos rigs. It comes in two flavours. The Edge VS4 features a dual-core APU, while the VS8 packs AMD’s low voltage A8-A4555M 1.6GHz quad-core, with a very potent Radeon HD 7600G GPU. Atom and Brazos systems are simply not in the same league.

Since the VS series features much more powerful hardware and a plethora of additional connectors at the back, it is somewhat bigger than Edge HD systems, but it is still a very compact system. The design is a lot more aggressive, a clear indication that there’s something special under the bonnet. It looks quite a bit meaner than the Edge HD, although some people might prefer the HD’s sleek and simple styling. 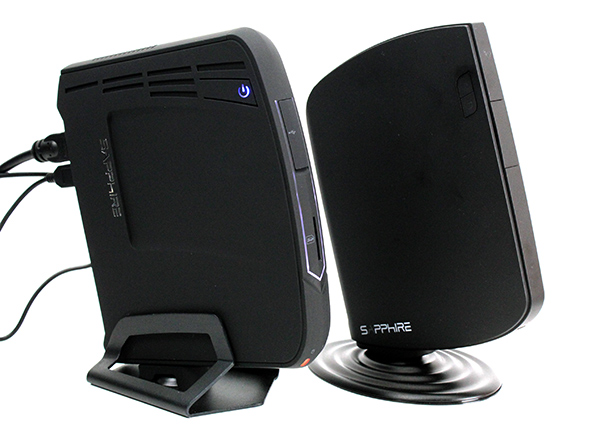 The Edge VS8 ships with 4GB of DDR3 memory and a 500GB hard drive. However, a barebones version is also available, with no RAM or HDD. It has DisplayPort and HDMI video outputs, along with built in wireless and a two USB 3.0 ports. Like other Edge systems, it does not ship with preinstalled Windows and potential buyers should bear this in mind.

Prev Next »
Last modified on 01 March 2013
Rate this item
(0 votes)
More in this category: « Sandy based Sapphire Edge HD4 delivers surprising performance Playing at 1080p with XFX Radeon graphics cards »
back to top