Since it is based on AMD's 28nm Cape Verde Pro GPU, this graphics card features 512 stream processors, has 16 ROPs and in this case features 1024MB of GDDR5 memory paired up with a 128-bit memory interface. The GPU is clocked at 800MHz while memory ended up clocked at 4500MHz.

The new Sapphire HD 7750 LP uses a low profile PCB paired up with a slim, single-slot cooler and features DVI, HDMI and DisplayPort outputs. To be quite precise, standard size HDMI and DisplayPort outputs were replaced with micro-HDMI and mini-DisplayPort, but Sapphire noted that a set of mini-DP to DP, micro-HDMI to HDMI as well as DVI to VGA adapters were included with the graphics card. It also comes with a both low profile and standard backplate.

The HTPC market is still pretty good and we are sure that Sapphire's new HD 7750 will find its buyers. Unfortunately, the precise availability date or the price have not been announced but you can expect it to sell at around €90 to €100 in Europe and around US $100 in the States. 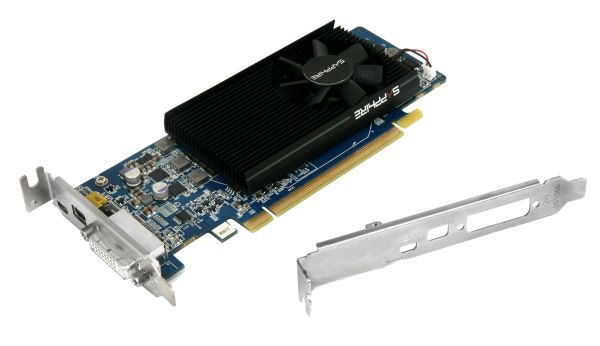 Last modified on 31 July 2012
Rate this item
(0 votes)
Tagged under
More in this category: « Nvidia to EOL GTX 560, 550 series Nvidia responds to overclock warranty controversy »
back to top