Nvidia has updated its OEM desktop lineup by silently listing a total of five different graphics cards that simply made a mess of everything. It is now pretty hard to know which graphics card is based on the new 28nm GK107 GPU, or which are simply rebrands of the 40nm Fermi based GF116 and GF114 GPUs.

According to Nvidia's site, OEMs will get three different versions of the GT 640, as well as GT 630 and GT 645 graphics cards. Earlier, Nvidia has released GT 605 and GT 620 OEM-only graphics cards that were basically just a rebrands of GT 520 and Geforce 510 but with higher clocks. To make things worse, we already wrote that these Nvidia rebrands will also hit retail as well, at least when it comes to entry-level graphics cards like the GT 620, GT 630 and Geforce 610.

As for the newely listed graphics cards, it appears that two of those, one version of the GT 640 and GT 645 will be rebrands again, based on the GF116 and GF114 GPUs. The other three, two other versions of the GT 640 and the GT 640 are apparently based on the 28nm GK107 GPU. These 28nm GK107 based OEM graphics cards will feature up to 384 CUDA cores and will feature a 128-bit memory interface with either DDR3 or GDDR5 memory, depending on the SKU. You can check out the rest of the details including clocks in the table below, but the most easy way to differentiate rebrands from the new 28nm parts is actually support for PCI-Express 3.0, as rebrands are apparently all sticking to PCI-Express 2.1. 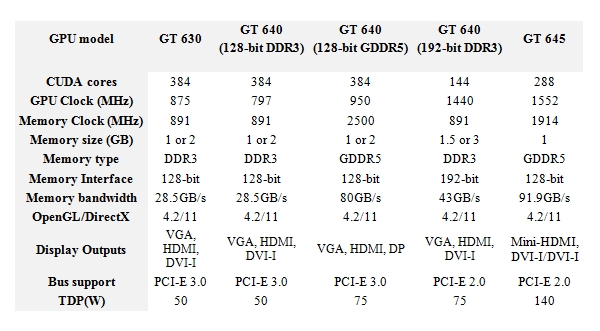 So, Nvidia has made quite a mess when it comes to OEM market and same thing is with mobile market as some will be based on Fermi GPU while only a couple of those will feature Kepler GPU, as we wrote here. Some Geforce GT 640 have already been listed in various desktop OEM systems, so it will be hard to guess which is just a rebrand and which system features the new 28nm graphics card.

You can try to make out some sense of Nvidia's product lineup page here.