Sources close to the folks at VR-Zone are reporting that Intel is scheduled to publicly introduce Double Data Rate 4 (DDR4) DRAM memory with the launch of its 22nm Haswell-EX enterprise platform in 2014.

According to the details, the company's 22nm Haswell-EX chips will have a minimum of 16 cores, scaling all the way up to as many as 60 cores on each four-socket motherboard. As such, the platform will require extensive improvements in ultra high-bandwidth, low-power memory architecture, and this is where DDR4 comes into play.

The upcoming Double Data Rate 4 memory interface is currently under development and is designed on process nodes between 32nm and 36nm by Samsung, Hynix and other component manufacturers. Upon launch, DDR4 is expected to immediately reach 12-percent market share in 2013 and should reach mass market adoption at 56-percent market penetration in 2015, according to an independent study by iSuppli. 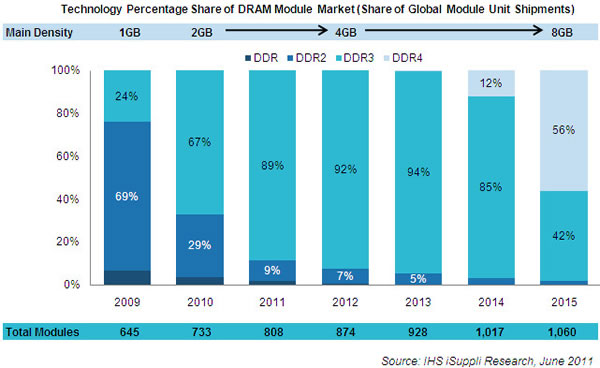 The new memory ICs are expected to operate at 1.2v or less (compared with 1.5v low-voltage DDR3 ICs) and are expected to be introduced at clock speeds of 2133MHz with performance capabilities of at least 2.13 billion data transfers per second. Moreover, some analysts even expect DDR4 modules will eventually reach clock speeds of 4266MHz at just 1.05v.

On the consumer desktop side of the market, Intel's 22nm Haswell and 14nm Broadwell chips will both support the new Socket LGA 1150 (see: 5 to 6 less pins than Socket LGA 1155 / 1156), but these 2013 / 2014 desktop platforms are only expected to support DDR3 modules. Not until 2015 should we see Intel's 14nm Broadwell successor platform, which will officially bring support for ultra low-voltage, fourth-generation DDR4 modules to desktop users. Nevertheless, enterprise users will be getting DDR4 support even sooner with 22nm Haswell-EX 4-socket platform sometime in 2013.