XFX has launched a special graphics card for the budget conscious gamers and it’s called XFX Black DD Radeon 7850 975M. XFX’s Black Edition cards traditionally pack only the best GPUs and this time around it comes overclocked from reference 860MHz to 975MHz. The memory got a slightly lower overclock from 1200MHz (4800MHz GDDR5) to 1250MHz (5000MHz GDDR5 effectively). All in all, this seems like a decent overclock that should turn into gaming performance. Another good thing about HD 7850 as well as HD 7870 cards is that AMD strapped the cards with 2GB of memory on 256-bit memory interface, which will be of much use to gamers running 1920x1080.

In order to compensate for higher temperatures, the card comes with powerful Double Dissipation cooler – a cooler with a special heatsink and two fans. Interestingly enough, this cooler was made for much faster HD 7870, meaning that its capabilities will far exceed the demands of Pitcairn Pro GPUs. In turn, XFX could slow down the fans and make the card almost inaudible, even when under full load. 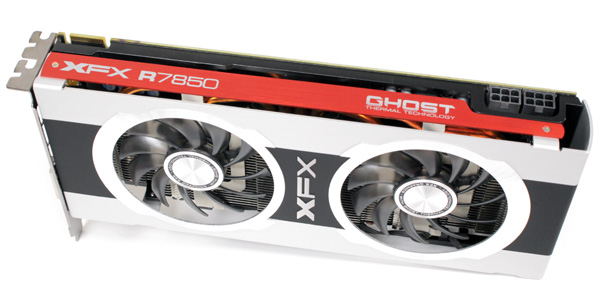 You’ll notice that XFX’s R7850 Black Edition is powered via two power connectors, a result of using the PCB made for HD 7870 cards. As far as consumption goes, XFX shouldn’t draw more than any other overclocked HD 7850, which usually comes with a single power connector.