Microsoft's Kinect sensor for Xbox 360, confirmed last year as the Fastest Selling Consumer Electronics Device in History by Guiness World Records, has now been officially made available for the Windows PC platform with all-new sensor hardware exclusively designed for close-range PC use.

During the company's final press conference exhibition at the 2012 Consumer Electronics Show earlier last month, company CEO Steve Ballmer announced that Kinect for Windows would start shipping on February 1st. In addition, Kinect for Windows SDK version 1.0 has been made available for download with support for Windows applications built with C++, C#, or Visual Basic by using Microsoft Visual Studio 2010.

Unfortunately, the new Kinect for Windows PC hardware comes at a high price. Suggested MSRP is $249, with Amazon and other major online retailers already offering the package at this suggested price. Many people, including ourselves, have been asking "Well why not just buy the $99 Kinect Sensor for Xbox 360, download Kinect for Windows SDK 1.0 and call it a day?" Apparently Microsoft has made some subtle hardware changes to the Kinect sensor for Windows, including some that are particularly beneficial for close-range use.

The new Kinect hardware features a "Near Mode" that allows the camera to see objects as close as 40 centimeters in front of the device without losing accuracy or precision, with graceful degradation out to 3 meters. Additionally, it features a significantly shorter USB cable designed for close-range PC use and finally, it includes a one-year warranty and receives software updates through Windows Update for both speech and human tracking. 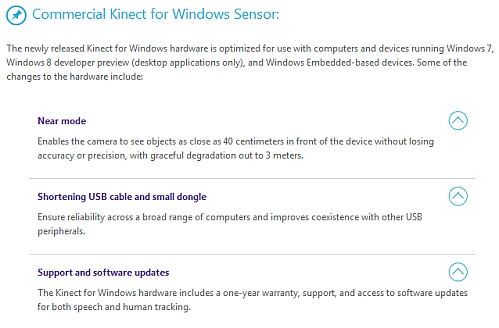 Microsoft's Kinect for Windows team has stated that the company plans on releasing updates to the software development kit and runtime 2 - 3 times per year and are already hard at work on the next release. While the initial cost of the new sensor remains high, Microsoft has also stated that it will offer "special academic pricing" of $149 for qualified educational users later this year.

Rate this item
(0 votes)
Tagged under
More in this category: « Nintendo is secret to long life Sony PSVita downloadable games priced lower than physical games »
back to top