The future of air CPU coolers


During CES 2012, and now officially, Cooler Master showed off its Vertical Vapor Chamber technology that will be featured in upcoming CPU heatsinks. The new tech simply places two vapor chambers between the heatsink that improves heat transfer due to the larger contact area of vapor chamber thus enabling higher cooling performance at pretty much same or even lower noise level when compared to now already standard heatpipe coolers.

According to Cooler Master, the Vertical Vapor Chamber features less than half the air resistance by reducing airflow vortexes and noise generated by air straming through a heatsink. Thanks to the 3 time the fin contact area, you get faster and more efficient transfer of heat from the vapor chambers to the fins and more efficient use of the available fin surface area.

Cooler Master has noted that thanks to the Vertical Vapor Chamber, the new coolers should be able to deal with CPUs in excess of 200W with the same or lower noise level when compared to traditional coolers. The first product that will feature Vertical Vapor Chamber tech is the TPC-812 that should be officially released sometime around CeBIT where we will certainly get more details. 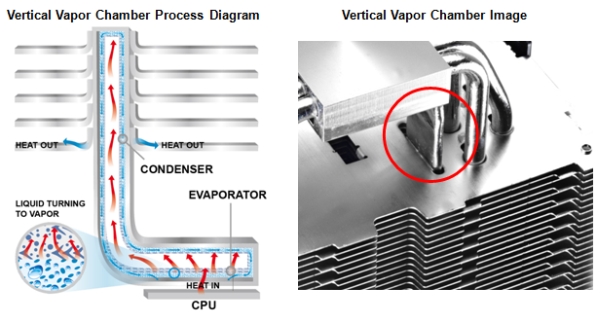 Last modified on 18 January 2012
Rate this item
(0 votes)
Tagged under
More in this category: « Microsoft's System Centre 2012 nearly out Sapphire Edge HD3 comes in February »
back to top